When she was recently asked why she chose this particular time to retire from her 45-year long position as choir director at the First Presbyterian Church in Berthoud, Beth Sommers said, “Why now? I figured that God would let me know when it was time to quit. Now is the time,” Sommers said.

Her tenure of 45 years has allowed Sommers to see church history in the making. She saw three pastors and three interim pastors come into the church. She has also seen many choir members come and go throughout those years. “A few members of the congregation have been there the entire time,” Sommers added. 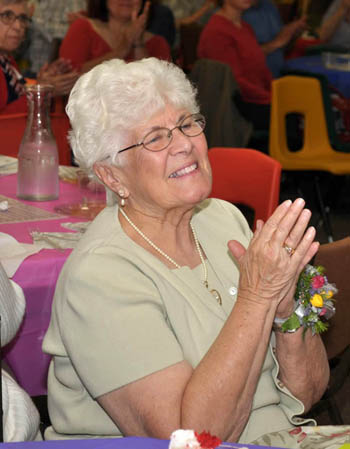 Beth Sommers beams as the choir finishes "her song"

Sommers came to Berthoud from her hometown of Neponset, Ill. after living in   Denver and Nebraska. She accepted a teaching position in Jefferson County Colorado after she graduated from what was then known as Illinois State University. Not long after she moved to Denver, she met a fellow teacher named Jack who was living in the same apartment building. That man, Jack Sommers, would eventually become her husband and father of their three children. Their sons Bill and John live in Berthoud and daughter Ann lives in Loveland. That proximity makes it possible for Beth and Jack to enjoy their children and three grandchildren on a regular basis.

Beth Sommers is accustomed to being surrounded by family. The oldest of eight children, she was raised on a farm in Illinois. Sommers explained that she’s been surrounded by music for her entire life. “Mother would play the piano and we’d sing. My dad didn’t play the piano but he was a singer.”

Sommers’ family joined in her musical pursuits in Berthoud. Husband Jack and son John both sang tenor in the First Presbyterian Church choir – Jack for 40 years and John for about 35 years.

Sommers taught elementary music in Berthoud and did substitute teaching in “many areas at Berthoud High School.” Her husband Jack taught math and coached for 20 years and was vice principal for 10 years at BHS.

At a time when careers last for an average of three to five years, it is only natural to ask what lured Sommers into a long-term career as public school music teacher and choir director. “When I was in high school I became sure that God had something for me to do in music. I am only adequate as a singer and piano player so I knew that those parts of music weren’t it.”

Music continues to be “instrumental” in Sommers’ life as she practices the French horn twice a week with the New Horizons Band as well as plays at their scheduled performances. She enjoys her involvement with the project that originated in Rochester, N.Y., as an experiment to see if older people could learn a new skill. “I had played manydifferent instruments but never the French horn so it was a real challenge, “ Sommers said. 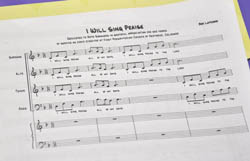 The First Presbyterian Church and many friends honored Sommers’ final Sunday as choir director with a dinner and a song, “I Will Sing Praise,” written by Bob Latchow and dedicated to Sommers’ 45 years of service. The church also had a stained glass window made and 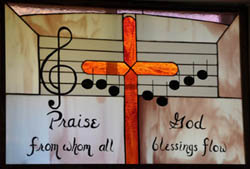 installed in the stairwell leading to the fellowship hall. A smaller version of the stained glass window was presented to Sommers and now hangs in the Sommers’ living room where it catches and reflects the western sun’s rays as it shines through the words, “Praise God fromwhom all blessings flow.”

Sommers was asked to summarize her thoughts on serving in the choir director position for so many years. “When I first interviewed for the position of choir director at the church here in Berthoud, the pastor reminded me that it was always for the glory of God, not the glory of man.” With a smile and a twinkle in her eye, Sommers added, “I just happened to also believe that.”