[1]The Little Thompson Observatory (LTO) in Berthoud, is proud to announce that it acquired First Light through its historic 24” (610 mm) Telescope on Friday, November 16. The first objects viewed were the Pleiades Star Cluster and the Andromeda Galaxy. A team of dedicated volunteers has been working diligently over the past five years to make this event possible. Preliminary results of visual observations through the eye piece indicate that the telescope is in excellent working condition, the pointing is precise and the clarity and sharpness of the observed objects is remarkable.

In 2004 the telescope was turned over to the Telescopes In Education (TIE) program, under the management of Gilbert Clark, who ran the program until its end in 2004. A lack of funding forced the telescope to be dismantled and moved out of its dedicated dome on Mount Wilson.

[2]The LTO acquired the telescope from the Telescope in Education program in 2007. The LTO management engaged for several years in discussions with Mt. Wilson personnel to arrange for the telescope to come to Berthoud. In the summer of 2009 LTO’s president Meinte Veldhuis and board member Dr. Larry Westrum visited Mt. Wilson Observatory and loaded the 24 inch telescope onto a trailer and brought it back to Berthoud (see picture on right).

[3]For several years the volunteer staff at LTO worked diligently on facility improvements to house the 2,000 lb. telescope. Projects included building and installing a second dome, adding the necessary hardware and software control systems (provided by Software Bisque in Golden, Colo.) and changing the optical configuration from a Nasmyth-Cassegrain Reflector to a Newtonian Reflector, rebuilding the 5” diagonal secondary mirror and installing a Crayford style focuser for the new optical layout (provided by AstroSystems in Evans).

This effort finally came to fruition on Friday, November 16, when the audience of our monthly public star night was invited to observe the heavens through the completed 24” telescope in our East dome.

The not for profit Little Thompson Science Foundation operates the Little Thompson Observatory in Berthoud as an all-volunteer organization. It performs community outreach programs through monthly public star nights with knowledgeable speakers, who discuss a variety of interesting astronomical and scientific topics. It also hosts a large variety of visitor groups by appointment and gives them a memorable evening or daytime session, teaching them about the objects in our sky with the help of our constellation wall and letting them observe these objects through our telescopes. The LTO has hosted more than 53,000 visitors from its opening in 1999, with ~68% of our visitors in our target audience group of K-12 grades.

The observatory and Berthoud High School have created a magnet astronomy course for high school students, taught one evening per week and open to students from all district high schools. The observatory also supports professional development workshops for teachers, which are accredited by local universities and the school districts and partially funded by NASA.

Besides the 24” telescope, the Observatory also houses an 18” Tinsley Cassegrain reflector, a 6” Astro-physics Refractor, and a 90mm H-alpha solar telescope. The LTO can be contacted via its website at www.starkids.org or by phone at 970-613-7793 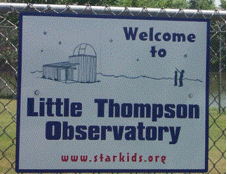 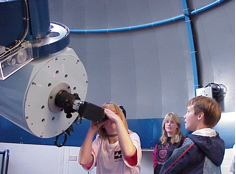