Once upon a time, the United States was a prosperous nation with a strong middle class. The middle class had achieved what President Theodore Roosevelt dreamed for the middle class; a living wage that allowed them to take care of their family, buy a house, save some for old age. These people were able to live the American Dream and they purchased the products made in factories in the U.S. They were able to support charities and community activities. Workers shared in the wealth created by their labor.

Times have changed. See the charts and read the story below. 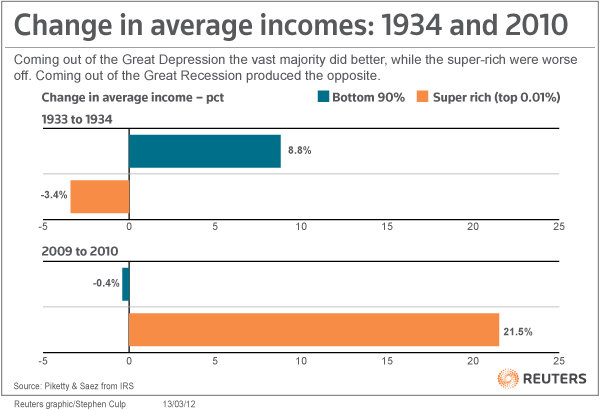 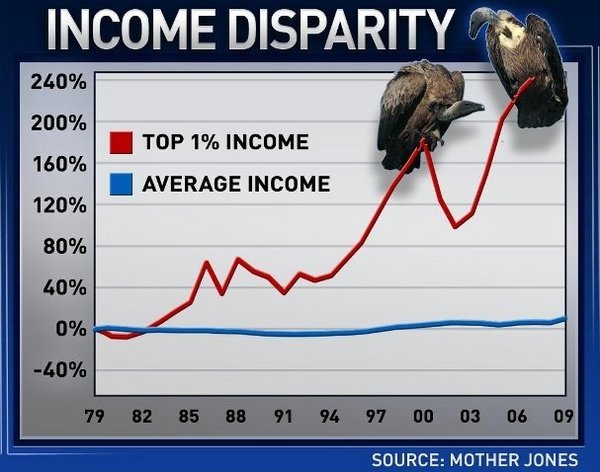 This Week in Poverty: Me, Mom and Reagan [3]

Here’s the new American reality: about half of all kids will spend at least part of their childhood in a family headed by a single mother, and the typical single mother is white, has one kid, is separated or divorced, works and probably earns less than $25,000 a year.

Wait, what? Run that back to me.

Because when I was a kid being raised by a white single mom, President Reagan basically promised me we that we were different, special even. My Mom put herself through school and worked. The typical single mom, according to the president, was a “welfare queen” taking “government handouts” so she could drive her “Cadillac” and raise her “strapping young bucks” on “T-bone steaks.” He didn’t have to say she was black, lazy and never married—everyone knew it. This image persisted through welfare reform in 1996 when basic cash assistance was gutted [4], and it still grips the American psyche today.

But a new report [5] from Tim Casey, senior staff attorney at Legal Momentum [6]—the nation’s oldest legal defense and education fund for women and girls—departs from this iconic portrayal of single moms. Instead, Casey goes out on a limb and turns to data from crazy outfits like the US Census Bureau. The report is a lot less fun than the alternative universe [7] offered by the current crop of Republican presidential candidates, because Casey stubbornly insists on using “facts.”

“There are single mothers in large numbers in all demographic groups,” says Casey, who has worked on economic security issues like welfare, poverty and childcare for thirty-five years. “They tend to have only one or two children—only about one in five have more than two children.” … Read More [3]

Over the last three decades, the wealthy have gotten a bigger share of he pie and more Americans live in poverty. The conservative in the U.S legislature wants to accelerate that even more as proposed in the recently introduced Ryan Budget. The proposal takes money from the poor and elderly and gives big tax brakes to the already wealthy. It has been called a reverse Robin Hood Bill. Read some of the articles below. It also calls for selling off of public lands and preserving billions in tax breaks for big oil.

The debut of the House Budget Committee chairman’s vision for what conservative governance could and should look like might win him kudos from the conservative policy class, but it elicits only groans from GOP political professionals.

“As a campaign issue, the budget is a significant challenge for GOP candidates,” said Bob Honold, a GOP strategist and partner at Revolution Agency. “As a campaign strategy, it is so much more difficult for Republicans to communicate their responsible solutions than it is for Democrats to spook seniors with rhetoric.”

Another senior GOP strategist was far more blunt. “Didn’t they learn their lesson?” the source asked. “House Republicans are still under the mistaken impression they have to lead. It’s a presidential election year; they’re along for the ride.”

Maybe. But, the concern within Republican campaign ranks is that Ryan’s budget plays out much like it did when he put out his “Path to Prosperity” last year. … Read More [9]

[11]Since Rep. Paul Ryan’s (R-WI) new budget eliminates $1.5 trillion from the Affordable Care Act, cuts $770 billion from Medicaid and reduces Medicare spending by $200 billion, Ezra Klein points out [12] that “it would be very interesting to see an estimate of the uninsured population under Ryan’s budget.” The Congressional Budget Office (CBO) analysis [13]of Ryan’s plan does not provide those numbers, but a rough back-of-the-envelope estimate suggests that at least 48 million Americans could lose their health insurance: … Read more [10]:

House Budget Committee Chairman Paul Ryan (R-WI) released the GOP budget yesterday morning.  In all the coverage about the  massive shortcomings of the budget [15], many may have missed the proposal to sell off millions of acres [16] of the public lands that belong to all of us.

Ryan Budget “Path to the Poorhouse” [17]

The budget [18] unveiled by House Budget Committee Chairman Paul Ryan (R-WI) this morning includes substantial changes [19] to the American tax code, both for corporations and individuals. Ryan’s tax plan shrinks the number of income tax brackets from six to two, with marginal tax rates set at 10 percent and 25 percent. He repeals the Alternative Minimum Tax (AMT), slices the top corporate tax rate to 25 percent, and repeals all of the health care taxes contained in the Affordable Care Act. It also repeals the repatriation tax on profits corporations earn overseas then bring back to the United States.

In all, those tax breaks amount to a $3 trillion [20] giveaway to the richest Americans and corporations, according to the Tax Policy Center. Repealing the repatriation tax would add roughly $130 billion to that.  … Read More [21]