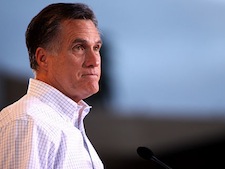 [4]People who lie a lot also tend to whine a lot, particularly when their prevarications are exposed. As a presidential candidate, Mitt Romney gives the impression of never having been in a fair fight. He’s remarkably thin-skinned for somebody in public life.

Everybody expects politicians to embellish the truth, but Romney’s epic misrepresentations continue to astonish. Yet he appears flabbergasted that anybody’s allowed to talk back. Why, my dear fellow, it simply isn’t done.

Maybe this works in the executive suites and country clubs where Romney’s spent his life. But it’s a dubious strategy in an American presidential campaign. Regarding his taxes, for example, Romney could easily quell suspicion that he’s hiding something politically disqualifying. Release five years’ worth of returns (half the number President Obama’s put on the record), and move on.

Instead, he essentially demands that voters take his gentleman’s word that he’s never paid less than (a meager) 13% in taxes. However, his recent statement didn’t specify “federal income taxes,” a significant omission for somebody who made his fortune manipulating the tax code. If Romney’s arrived at the 13% figure by combining state, local, sales, excise, as well as real estate taxes on his several mansions, voters deserve to know.

Reporters should also ask, straight up, if Romney took advantage of the IRS’s 2009 one-time amnesty for money hidden in foreign bank accounts.

But Romney’s taxes are trivial compared to the ugly falsehoods his campaign’s spreading about Medicare. … Read More [2]