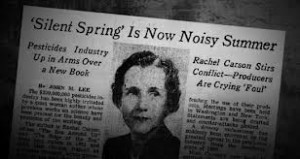 [3]Fifty years ago, a Johns Hopkins–educated zoologist did something that few at the time thought was possible. With the publication of one book, she started a national debate about the universally accepted use of synthetic pesticides, the irresponsibility of science, and the limits of technological promise. She also challenged the metastatic growth of the synthetic chemicals industry that grew out of World War II.

Silent Spring [4] was Rachel Carson’s third book, following The Sea Around Us and The Edge of the Sea. The Sea Around Us had won the 1952 National Book Award for nonfiction and remained on the New York Times bestseller list for 21 months. Yet it is unlikely that Carson, who had spent most of her career as an editor for the U.S. Fish and Wildlife Service, had any idea of what the publication of Silent Spring would engender.

Carson became interested in the harmful effects of pesticides, especially DDT, in the late 1950s. DDT was first commercially produced just prior to World War II, and was used to reduce the threats posed by insects to U.S. troops overseas. After the war, DDT was promoted as a great scientific advance and was widely and successfully used as an insect killer in the United States. The chemical was considered to be so benign that parents casually watched their children running in billowing white DDT clouds sprayed from trucks in residential neighborhoods. Read More [5]

By Judy Molland at Care2

What would Rachel Carson have to say about the environment [7] if she were alive today?

Tomorrow is the 50th birthday of Carson’s “Silent Spring. [8]” First published in serial form in the New Yorker and then as a Houghton Mifflin best seller in 1962, this densely researched and beautifully written attack on the indiscriminate use of pesticides caused a revolution in public opinion. Eventually it was a major factor in the founding of the Environmental Protection Agency [9] in 1970.

I came to this book late in its life, discovering it on my bedside table when I was attending a writers’ colony in upstate New York some fifteen years ago. But there was something perfect about being in my bucolic cabin in the Catskills and absorbing Carson’s carefully detailed arguments warning the public about the long term effects of misusing pesticides, while reminding us that we are a vulnerable part of the natural world subject to the same damage as the rest of the ecosystem.

She did not, in fact, call for the abandonment of all chemical pesticides. She asked instead for a ban on the more insidious, long-lasting chemicals like DDT [10], against which there was increasing evidence of harmful effects to many living things.

She asked also that the other chemicals be used more judiciously and that the regulations for their manufacture and sale be tightened. Finally, she sent out a plea for alternative methods for fighting pests, so that the flow of deadly poisons into the environment might be restricted.

And she largely succeeded: laws and regulations have been tightened, and most of the chemicals whose use she criticized have been banned.

But what would Carson have to say about our environment today?