DENVER, CO – The financial impact of a DUI is now even higher in Colorado.  The average cost of a first time DUI offense increased to $13,530 in 2016, that’s up nearly a third (32%) from the previous DUI calculation.  The new total comes as holiday parties and celebrations are ramping up, and law enforcement throughout the state is increasing patrols for impaired drivers.

A major factor in the increased cost of DUI: the average impaired driver in Colorado now qualifies as a Persistent Drunk Driver (PDD) based on blood alcohol content (BAC).  This year, the statewide average BAC in DUI cases was .164 – that’s more than twice the legal limit of .08.  The average BAC for DUI drivers in Weld County was .162 in FY16.  A driver with a BAC of .15 or greater is considered PDD – even if it’s the driver’s first offense.   In 2014 Colorado law lowered the threshold for PDD from .17 to .15, however the state average BAC remained fairly steady – ranging from .16 to .164 in the past five years. A person who refuses chemical testing (blood, breath, saliva, urine) or with two or more impaired driving offenses will also be designated as PDD.

The PDD designation increases consequences for drivers. PDD drivers must have an ignition interlock device installed in their vehicles for 24 months, and must complete weekly alcohol and drug education and treatment classes over nine months. These requirements alone account for 55 percent of the overall increase of the average cost of a DUI.

The overall cost of a first DUI was last calculated eight years ago.  That put the price of DUI at $10,270. The average cost is based on 22 different fees and expenses that a driver convicted of DUI would likely face.  These range from fees associated with detox or jail, court costs, probation fees, license reinstatement, and increases to auto insurance.

“Every DUI remains 100 percent preventable,” said Glenn Davis, a member of the Colorado Task Force on Drunk and Impaired Driving.  “Cabs, ride services, public transportation, or even buying dinner for a friend who will be your sober designated driver…they all cost money but not nearly as much as a DUI.  If there’s a chance you may become impaired, leave the vehicle at home.  It’s not worth the risk.” 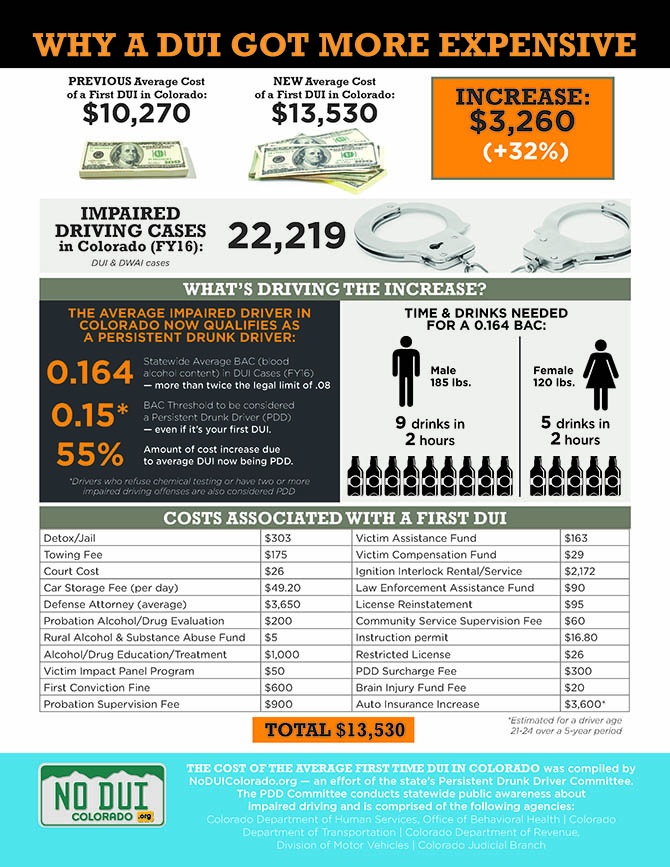