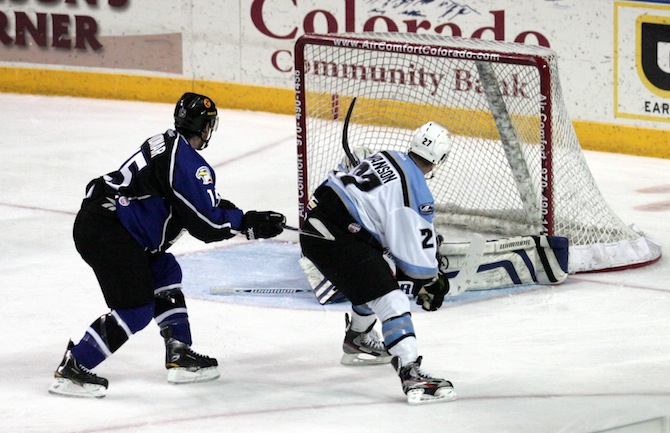 LOVELAND, Colo. – The defending ECHL champion Alaska Aces defeated the Colorado Eagles, 5-1, in the fifth consecutive game between the Mountain Division’s top two teams, and in the process, claimed their second division title in as many seasons.  The Aces received goals from five different scorers in the win, which raised their league-leading record to 41-16-9 (91 pts.).

The Aces scored twice in the first half of the opening period to take a 2-0 lead into the first intermission.  Their first goal came under two minutes in when Jordan Kremyr found a soft spot in the Eagles’ defense and one-timed a Blair Yaworski feed from the slot.  Ryan Cruthers doubled that lead with a power-play goal at 6:23 by getting just enough of a rebound from low in the left circle to get his shot past a sliding defender and Kyle Jones moving across the crease.

The Eagles out-shot the Aces, 12-10, in the second period, but Alaska took advantage of a two-man advantage and a couple of Colorado defensive breakdowns to out-score the Eagles 3-1 in the frame.  The Aces were awarded two separate partial 5-on-3’s consecutively early in the period, capitalizing on the second one when Nick Mazzolini tucked the puck inside the right post to give the visitors a 3-0 lead.

The Aces went up 4-0 two and a half minutes later when Zach Harrison scored on an odd-man rush, and ran into the Eagles’ netminder afterward.  Gord Burnett took offense, and was confronted by Kremyr, which resulted in the Eagles getting a power play.  They used that man-advantage to get on the board when Kyle Peto swept a rebound home with a back-hand shot from the slot at 11:32.

But at 14:10, a defensive breakdown led to a 4-on-2 rush for the Aces.  They sent a series of crisscross passes through the Eagles’ defense before Dan Kissel beat Jones from in close.  It was Kissel’s seventh goal in eight games against the Eagles this season, and increased his team-leading point total to 62.

The teams combined for just seven shots in the final frame — the first not coming until nine and a half minutes had elapsed off the clock — with neither netting a goal.

The Eagles will now head on the road for four games next week, starting in Las Vegas on Tuesday.