Today, behind closed doors in Charlotte, North Carolina, legislators from 15 states [4] will meet with the oil and gas industry to discuss so-called “model legislation” as part of the American Legislative Exchange Council (ALEC). The result could be laws that handicap renewable energy targets — while creating loopholes for fossil fuels, written directly by the oil and gas industry itself.

ALEC has faced backlash recently for its role in crafting Florida’s Stand Your Ground laws. Now the organization is taking the same secretive approach to kill renewable energy development [5] across the country.

Oil and gas corporations have a very strong role in politics through groups like Americans For Prosperity, American Petroleum Institute, and, of course, ALEC. Four of the largest oil and gas corporations and two of the most profitable U.S. corporations overall, ExxonMobil, Chevron, Shell, and BP [6], sit on ALEC’s task forces. And so today, according to documents posted by Common Cause [7], representatives from these and other energy groups will discuss potential legislation that would undermine clean energy standards and limit regulations of polluting industries.

The United States of Oligarchy [9] 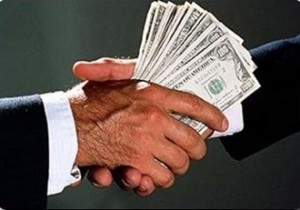 There have been a lot of articles lately about the 15 corporations who have left ALEC, which is a good, positive thing. Perhaps it is pessimistic, but these are the companies still belonging to ALEC. [12]

The link above gives you the full list of corporate ALEC members, aka the 1%, those who steal our democracy away with their money. Among the full list of ALEC members, these are perhaps the worst offenders: AT&T, Bank of America, BP, Chevron, Bayer, [13] Exxon Mobil Corporation, General Electric Company, General Electric Company, Koch Companies Public Sector, Shell Oil Company and Wal-Mart Stores, Inc. Each of these companies has its own special place in hell. Who among us has not done business with most or all of these companies? They use our money to rob us of a government of the people, by the people and for the people. Wouldn’t it be grand if people started boycotting these companies, writing their headquarters, etc? These are the ALEC companies that should be most targeted by people who want their government back.

There are other companies that buy our government, steal our democracy in other ways” These companies steal our government away from the sound of our voices… Their products pollute more than the big oil companies pollute” Every year, they kill more people than cancer kills. They are the top 20 defense contractors [14]” The war-for-hire-mongers. The damage they do most is killing both our own troops, killing foreign nationals and keeping the country in a continuous state of war.

We the People …. under God, shall have a new birth of freedom–and that government of the people, by the people, for the people , shall not perish from the earth. Abraham Lincoln wrote these words and spoke them at the Gettysburg address. The words seem almost meaningless in 2012. … Read More [9]