ASHLAND, OR — Drivers witnessed a young child wandering naked along the side of the highway. One driver, Adam Bednar, stopped his car and called police to help. That decision ended up being a painful one for the 11-year-old girl, who suffers from autism.

Bednar says that the trooper who arrived called for her to stop, and when she didn’t respond threatened twice to taze her. After giving no response, two little red dots appeared on her back, then metal barbs. The child did not respond because of her learning disabilities.

“She seized up and she fell face first on the ground,” said Bednar.

The department backed up the officers’ actions by claiming the girl was going into traffic. But Adam Bednar, the eyewitness, says that is a lie. “She wasn’t going off the road, she was set on walking down the freeway,” he stated.

Is no one safe from police over-reaction? 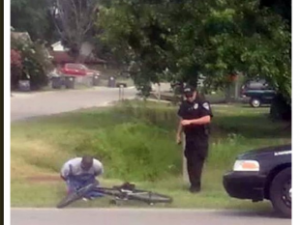 Firefighter George Madison Jr. was out on a bike ride on Tuesday when he made the mistake of waving to some cops in a patrol car. The 38-year-old part-time firefighter, part-time pastor thought he might know the officers since he has dealt with many in his work.

But these cops were not friendly. Here’s what happened next, according to theEvansville Courier & Press

“The officer jumped out and says, ‘What are you doing throwing your hands up at us?’” Madison said. “He is talking to me as he is coming toward me. I tried to explain, but I couldn’t get a word in edgewise.”

He said the officer’s angry attitude made him feel angry and alone.

“It was like everything had disappeared, and I was there alone and I got scared,” he said.

Madison thought it might be a good idea to call his friends in the police department to help explain to the officer who he is, but the officer told him to put the phone down and grabbed his arm. That’s when the stun gun came out.

WATCH: Corrupt sheriffs exposed by their own dashboard cameras [3]

In May of this year, Steve Hindi of the animal rights group SHARK (Showing Animals Respect and Kindness) alleged that he was stopped illegally in the state of Oregon by the Malheur County Sherriff’s Office. Now new footage from the sheriff’s own video has proven him right.

Hindi, who made his own recording [7] of the incident and posted it on the Internet, was told by Deputy Brian Belnap that he was trespassing on the grounds of the Jordan Valley Rodeo. Belnap went on to claim that the reason they had to stop Hindi was because he was driving a rental car and they needed to obtain his identification.

When Hindi explained to the officer that he had paid the $10 admittance fee and wasn’t trespassing, Belnap then told Hindi that he was kicked out for having a camera.

Several states in the U.S. have passed anti-whistleblower bills, otherwise known as “ag-gag” bills, which prevent whistleblowers, animal rights activists and even journalists from filming or taking photos without the consent of animal enterprise industries such as factory farms, etc.

After Hindi’s encounter with the sheriffs, SHARK launched an investigation into the connections between the Malheur County Sheriff’s Department, accusing it of violation of free speech and using intimidation tactics. SHARK found that the Sheriff’s Department has direct ties to the rodeo, with one of the deputies even being on the rodeo’s board. 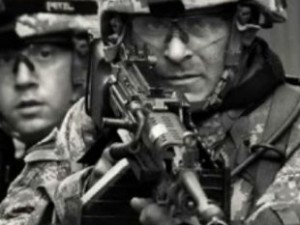 The assault is the latest example of police using military tactics against American civilians, often for no reason at all.

The police raid of a small organic farm in Arlington, Texas, which lasted for more than 10 hours and included aerial surveillance and a SWAT team, resulted in a confiscation of vegetables and plants on the property only, Huff Post reported [9].

Owners of the property called “Garden of Eden” are now demanding an apology from police and compensation for what was taken from them including 17 blackberry bushes, 15 okra plants, 14 tomatillo plants, native grasses and sunflowers, after police were granted a search warrant for marijuana plants. Ironically, no evidence of marijuana was found on the property.

The raid resulted in all adults being handcuffed and the residents held inside at gunpoint for at least half an hour, according to owner Shellie Smith:

“They came here under the guise that we were doing a drug trafficking, marijuana-growing operation…They destroyed everything,” she told WFAA. [10]

“There were sunflowers for our bees and gifting. Lots of okra, and we had a sweet potato patch that they whacked down with a Weed-Eater…The weeds that we used to shade our crops are also gone”, she said.

Moreover, Smith claims [11] that police failed to show a warrant until two hours after the raid began and hid their nametags to avoid identification.

Or, this is so increible – same story by a different writer.

The Garden of Eden really does exist… in Arlington, Texas. It’s a sustainable farm community blending modern technology and green practices, where a small group of people live and grow food in a garden about half the size of a football field. The farm, which was founded by Quinn Eaker, is on 3.5 acres in South Arlington.

The farm has been involved in a code dispute with the city of Arlington since February of this year, trying to find a balance between public safety and private rights. According to the Garden of Eden website [11], this dispute had been settled, the inhabitants having trimmed grass and bushes per the city’s request. At that time, the city had signed documents agreeing that they would take no further action on those violations. The community of the GOE thought that was the end of it. Turned out that they were sadly mistaken.

On the morning of August 2, police descended upon the small farm. That is about the only thing that everyone agrees on. Police state that they were only on the property for 45 minutes while the GOE claims it was 10 hours. Considering the actions taken by police, the 10-hour estimate sounds more believable. The inhabitants of the GOE were all handcuffed while police searched the property for marijuana. Why? A tip came that the residents were growing marijuana in a spot “surrounded by bamboo,” and aerial surveillance indicated that “the plants inside appeared to be consistent with marijuana.” Whoever examined those photos needs a book on botany: the plants were tomatoes. When he was asked if they were growing pot, Eaker answered no. He thinks [13] that the police just wanted to believe it so badly: