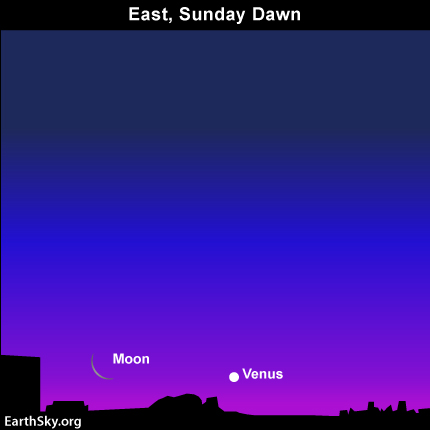 [3]Given an unobstructed eastern horizon and clear skies, many people around the world should be able to see the waning crescent moon [4] with the planet Venus at morning dawn tomorrow (Sunday, May 1). At mid-northern latitudes – like those in the continental US – the moon and Venus sit close to the eastern horizon around 60 to 45 minutes before sunup.

The farther north you live, the less likely that you will see tomorrow’s moon and Venus [6] show. That is because the moon and Venus do not rise much before the sun at latitudes as far north as Canada, northern Europe or northern Asia.

The farther south you live, the more likely that you will catch the moon and Venus in the dawn and predawn sky. In the northern tropics and especially in the southern hemisphere, the moon and Venus actually rise in the wee hours before dawn.

Day by day, Venus descends closer to the sun and the twilight glare. On the other hand, the morning planets Mercury, Mars and Jupiter climb away from the sun, though these worlds are now hiding in the glow of dawn. (See yesterday’s [7] program for a detailed sky chart.)

May 2011 will stage a good number of planetary conjunctions. In fact, the planets Mars and Jupiter will be in conjunction tomorrow, but it will be hard to see (even with binoculars) from mid-northern latitudes.

Looking ahead, Venus will pair up with Mercury in a week. After that, Venus will have a conjunction with Jupiter on May 11 and then Mars on May 22. Prepare now, using the moon to find Venus, the sky’s brightest planet, at morning dawn May 1.