The town board, mayor and staff got a little break with no town board meeting last Tuesday, but that doesn’t mean they don’t have official duties to perform.

Accompanying Commissioner Donnelly this week was Jerry Blehm from Environmental Health Services and Jane Viste, the Public Information Officer for the Departmet of Health and Environment.

Medical Marijuana was one of the first topics of discussion. The county commissioners had just banned dispensaries in the unincorporated areas of Larimer County and Commissioner Donnelly said the reason was that the commissioners deemed that infrastructure and law enforcement were not robust enough to handle the demands of retail medical marijuana dispensaries.

Blehm had some interesting information on the preparation of what the industry calls “edibles,” food with marijuana as an ingredient. Such edibles should be prepared in a proper commercial kitchen but the county has no oversight on inspections as they do for restaurants. Additionally, he said that even if they did, the present rules would not allow them to permit the introduction of an unapproved substance into food. He labeled it as “adulterated.” He went on to say that the Colorado Department of Revenue, as the licensing agency, will take on the responsibility of health inspections in kitchens preparing the edibles.

Berthoud Town Administrator Hart said the town was going to take the approach of regulating dispensaries, not legislate. In response to a question about limiting the number of marijuana business in the town, Commissioner Donnelly said that municipalities cannot limit the number any more than they can limit the number of other types of business.

Viste brought information about the flu season and the West Nile Virus. While West Nile carrying mosquitoes have been trapped in all areas of Larimer County, only three people have been hospitalized. Still, she stressed the importance of staying out of harms way by staying inside during the dawn and dusk times of high mosquito activity and using repellents if one needs to be outside.

Viste also recommended taking the seasonal flu shot, which includes H1N1 this year. Even though the H1N1 did not cause as much of a problem as anticipated, it is pandemic and could be a threat. Several person in attendance did not want the H1N1 shot and asked if the vaccine was available without it. Viste said it was not. She also said that the county did not have their supply yet, but that physicians and pharmacies should have theirs and it is not to early to take the shot.

The session closed with question on the county‘s participation in the regional crime lab. Commissioner Donnelly said that Greeley was paying for construction of the facility and that there would be no increase in staffing by Larimer to participate. Additionally, it may save money and time by having the facility so nearby so that evidence does not need to be taken to the Colorado Bureau of Investigation lab in Denver.

Wednesday afternoon was Mayor Patterson’s time to shine as he addressed the winners and parents of the Berthoud Safety Day [2]and Bike Rodeo. The mayor complemented the young people for their participation and riding skills and lauded the parents for taking the time to bring the youngsters for the presentation. See the list of winners [3]. 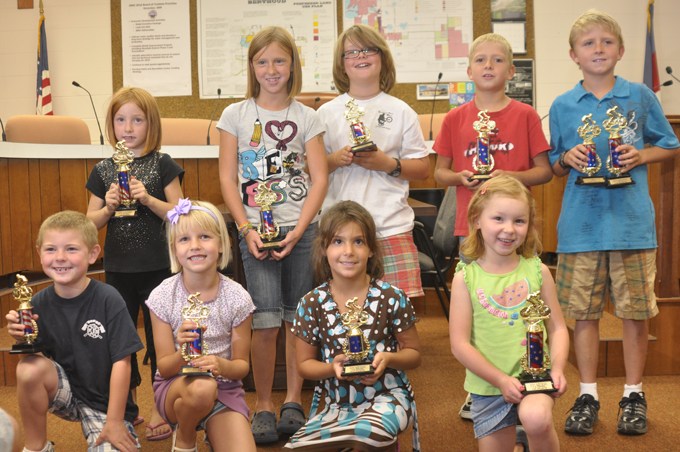 [4]
A group photo of most of the Bike Rodeo trophy winners. 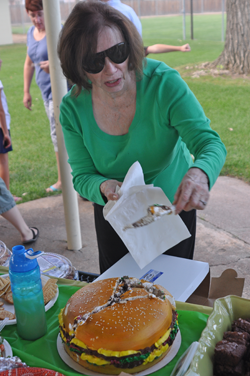 [6]
Muriel cuts the cake which looks like a hamburger

Friends and family showed up at Town Park on Thursday evening to say goodbye to Jeremy Roush who has the opportunity to ply his culinary skills to what will be an appreciative audience at Amhurst College (read about it here [7]). The revelers brought plenty of food and good wishes for Jeremy; and Debra in absentia. A souvenir apron was available for writing a keepsake message. This apron will probably not see kitchen duty. Gone but not forgotten was the wonderful food at the Wayside Inn and Jeremy coming out of the kitchen to talk to the customers. We will miss him. 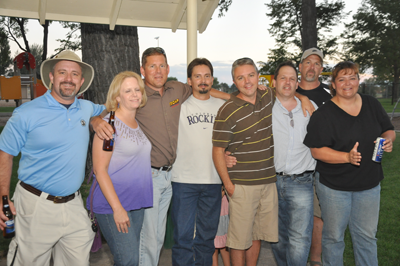 The Wildfire Street festival and mural unveiling brought out the neighbors for a good time and good food on Saturday evening. There was barbeque, cupcakes, cold drinks and free ice cream for those who filled out the new library survey. Follow this link to the library and enter for a chance at a $25 gift certificate. 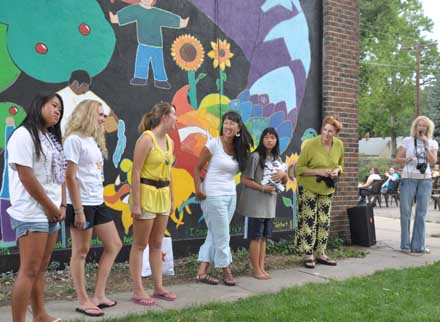 Liz Kearney took up the microphone at half past four to announce the unveiling of the new mural [10] on the side of the Wildfire Arts Center. After handing out T-shirts to those, mostly youngsters, who participated in the project, Kearney turned the microphone over to the mayor who gets to speak at all these public functions. He does appear to enjoy the chance to talk. After the mural dedication and the Wildfire Tap Dancers put on a show, The Panhandle Daddyz took the stage and the crowd began dancing in the street. 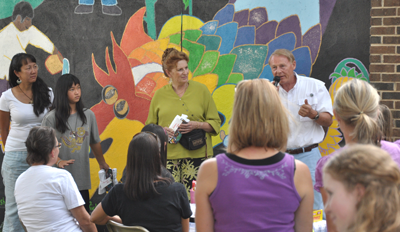 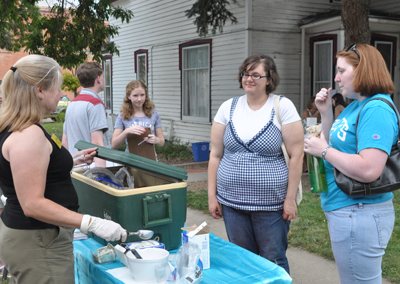