Jacob Scott Belt, DOB: 021092, and Blake Eric Bratrud, DOB: 111891, both of Estes Park, were booked into the Larimer County Jail last night on felony charges of 1st Degree Arson, 2nd Degree Burglary and a misdemeanor charge of Theft. Belt and Bratrud were arrested by the Estes Park Police Department yesterday on felony warrants issued by the Larimer County Sheriff’s Office.

Belt and Bratrud are accused of entering a home in the 600-block of Fish Creek Road in Estes Park on November 19, 2010, taking items from the residence and then turning on a stove which later caused a fire in the home.

Belt and Bratrud are both being held on a $10,000 bond for the following charges: 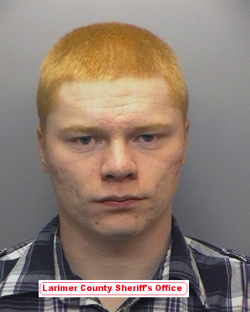