Loveland, CO (Action-Works) August 26, 2010 – If it flies on its own, drives on its own, or dives on its own you are likely standing in the midst of the Unmanned Systems North America 2010 convention held August 23rd–27th at the Colorado Convention Center. A select group of 40 from the Thompson School District were among the 200 students from the entire state that were fortunate enough to participate in the RoboTour event which allowed the students to experience the commercial side of the robotics industry. The convention brings together about 400+ companies from industry; from the stalwarts of industry, Lockheed Martin, Ball Aerospace, Northrop Grumman, Raytheon and iRobot to Colorado companies Stratom of Boulder and SA Technologies and Road Narrows of Loveland to name a few.

The Association for Unmanned Vehicle Systems Internationa [1]l (AUVSI) Foundation’s Youth Education Program is designed to introduce future generations of scientists and engineers to the exciting world of unmanned systems. Students enjoyed a brief presentation followed by a guided tour to various points in the exhibit hall where they had the opportunity to see actual unmanned vehicle systems and component technologies up close. The tour ended at the student competition pavilion where university students displayed unmanned systems they designed for AUVSI’s student competitions.

“The AUVSI Foundation is committed to the future of this rapidly growing industry and developing programs to attract and equip students for a career in the robotics and unmanned systems community, ” says Daryl Davidson, Executive Director, AUVSI Foundation. “ Along with this primary objective, we are committed to the goals of STEM (Science Technology Engineering and Math) education in the US. Getting some of these toys into their hands is a great way to inspire them to continue in a technical path. ”

“These students are extremely fortunate to have this experience, ” says Liz Rayment, Thompson School District’s [2] Robotics Coordinator. “ RoboTour [3] for the students can be one of those life-changing events where students may see something that captures their imagination and drive them to a career. We are fortunate that our school district sees the value of STEM offerings and has capitalized on this opportunity. In addition to the student day, I was invited to attend the first ever AUVSI Robotic Education Forum. I was thrilled to be a part of this outstanding event. ”

At the end of the day, Kristal Domenico, coordinator of the STEM program at BHS asked what the students thought of the tour, she got WOWs and thank-yous from the back of the bus. Students will be able to post to the AUVSI link on her wiki http://domenicoscience.wikispaces.com/.

As part of the Education Forum on Monday, Dr. Kenneth Berry, Assistant Director of the Science and Engineering Education Center, University of Texas at Dallas noted that, “Fully one-third of our economic GDP is generated from innovative products that were not invented 10 years ago, two-thirds of CEOs in Fortune 500 companies are engineers, but half of engineering students drop out in the first year of college. ” He believes that robotics needs to move from an after-school activity to hand-on, project-based curriculum as part of core educational offerings. 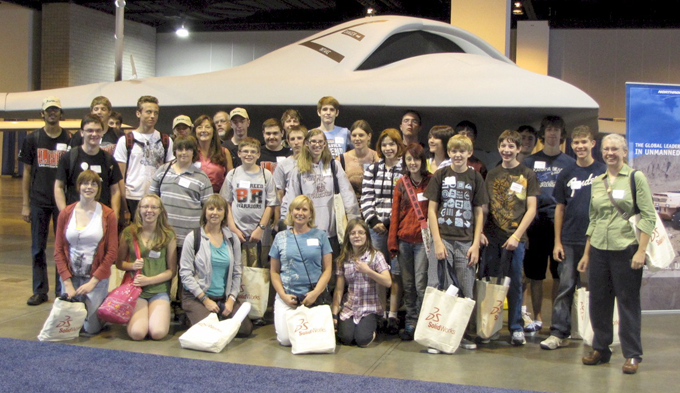 Exhibits included LIVE Demonstration Areas featuring Air, Ground and Maritime vehicles, with product announcements and presentations by exhibitors from the exhibit hall floor, and with “Exhibit Hall Uniform Day” where military and civil servants in uniform had complimentary access to the exhibit hall on Friday August 27.