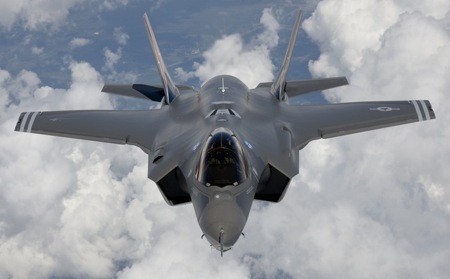 Just in time for the Fourth of July, Ball Aerospace held a ribbon cutting for its expanded Aerospace Manufacturing Center in Westminster, Colo. Community leaders, elected officials, and employees were on hand for the June 29 ceremony and tours of the $14.6 million expansion project.

President and CEO of Ball Aerospace & Technologies, David Taylor hosted the event and praised the Ball employees for their dedication and ability to deliver what the customers wanted and needed. He said the employees were the key to Ball Aerospaces’s growth and success.

The Westminster facility builds fifteen different flush mounted antennas for the fifth-generation fighter. The present low volume manufacturing requires 30 full time employees, but future production plans call for the building of 48,000 antennas through the year 2036. The production workforce will increase to nearly 200 employees.

Lt. Governor Joseph Garcia and Congressman Mike Coffman attended the ceremony and spoke of the importance of the contract for the economy of Colorado. With 15 supplier locations in the state, the F-35 program currently provides over 460 direct and indirect jobs and nearly $33 million in economic impact across the state.  These employment figures and economic impact numbers are anticipated to increase as the program reaches full-rate production. Representative Coffman said the F-35 fighter is a needed replacement for the aging fleet of military aircraft. 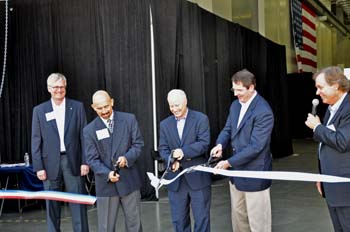 Lockheed Martin showcased the F-35 Lightning II [1]by bringing its mobile cockpit demonstrator to the facility giving elected officials and members of the press a chance to “fly” the advanced fighter. The Lightning is being developed in three versions, with a Short Take Off Vertical Landing (STOVL) version to replace the Marine’s aging fleet of Harriers. The aircraft was developed as the Joint Strike Fighter for use by both the United States and its allies.

The F-35 program has suppliers in 47 states and provides more than 127,000 direct and indirect jobs across the country, building and sustaining a high skilled workforce critical to national security and economic prosperity. Additionally, thousands more are employed in the F-35 partner countries. Those countries are the United Kingdom, Italy, the Netherlands, Turkey, Canada, Australia, Denmark and Norway.

Lockheed also developed the original P-38 Lightning [4], which saw action in WWII and was the aircraft flown by the leading American ace and Medal of Honor recipient, Richard Bong, who tallied 40 kills in the Pacific Theater.