Berthoud High softball standout Danielle Wikre will be taking her talents north to Fort Collins next fall. On Tuesday night Wikre, a three-time All-Conference and 2010 All-State selection for softball, signed her letter of intent to play softball at Colorado State University.

Wikre was also courted by Metropolitan State College of Denver, the University of Northern Colorado and Florida State, but she opted for Colorado State. Asked why she chose CSU Wikre said, “I’ve always liked the school there and it’s really close to home. When (CSU Head Softball Coach) Jen Fisher went there, we really had a connection.” Fisher formerly coached at Metro State and began recruiting Wikre last fall.

During her senior season, Wikre set Berthoud High softball team records in batting average, hits, RBI, homeruns, on-base average, slugging percentage, doubles and triples. Her .590 batting average, 10 homeruns, 50 RBI and 1.282 slugging percentage were good enough to get her named one of the top 10 softball players in the state of Colorado in 2010 by MaxPreps.com, a nation-wide high school athletics website associated with CBS Sports. Wikre also holds Berthoud High School career records in homeruns, RBIs, doubles, on-base average and slugging percentage. “She meant so much to us from a playing perspective but her leadership was huge too,” said Berthoud Softball Coach Dick Klocek, who plans to travel to Fort Collins next season to watch Wikre play for the Rams.

Wikre has been playing softball since she was in fifth grade. She said her parents have always been very supportive and encouraging of her desire to improve. “I can’t tell you how many hours we spent at the diamonds with her, she put in a lot of hours, a lot of hard work,” said Jeff Wikre, Danielle’s father. Wikre said playing for the state championship, where the Spartans finished as Class 3A runners-up, was her most memorable moment from her high school softball career. However, she was quick to add that the closeness and friendship among the players on the team was very important to her and to the Spartans success this past season. Wikre said she prefers to think of her fellow players as friends rather than mere teammates. “They were always there to support me however I did,” she said and added, “I’m really going to miss them.”

Despite dominating at the high school level, Wikre recognizes playing at the Division One collegiate level will be present a significant challenge. “It will be more intense, definitely, and I will go against more competitive players,” Wikre said of the college game and added, “I will have to work a lot harder.” Wikre, who has also lettered three times in basketball, said she has already been given an exercise and training guide from CSU and gotten to know her future coaches as well as some teammates.

Wikre said she will enjoy her senior year of high school before moving up to Fort Collins in August where she will live on-campus. She plans to pursue a major in Business Administration and a minor in Sports Management. 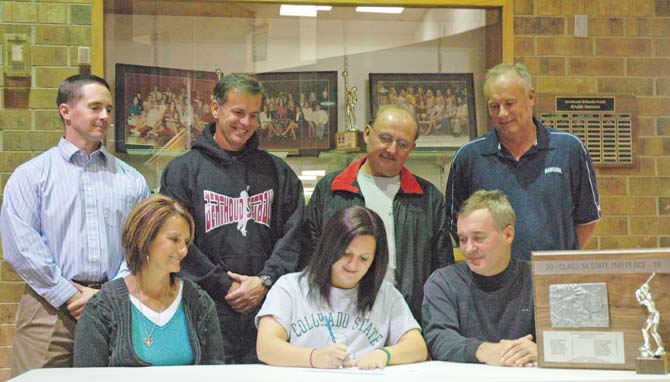