Even in the world of sports, bigger does not always mean better. The Berthoud and Highland boys high school basketball teams learned that fact on Tuesday evening as the Spartans routed the Huskies 67-45.

Even before the opening tipoff, Highland appeared to have a significant advantage in the game thanks to having trio of players who measure in at 6’4” or taller, including 6’7” senior Kyle Stuehm. In contrast, Berthoud’s tallest players are listed at 6’2”.

Not surprisingly, the differences in the physical stature of each team resulted in contrasting styles of play. Berthoud, smaller and quicker, played a perimeter-centric game by taking a lot of shots outside while Highland routinely tried to get low in the paint for lay-ups and short range jump shots. The results were expected – Berthoud made seven three-pointers on the night, five more than Highland even attempted.

The strategy employed by Berthoud Head Coach Pete Scheck to counter the Huskies’ size advantage worked brilliantly. The Spartans would hold the ball at the top of the key and circle the perimeter, drawing Highland’s defenders away from the basket. Berthoud would then pass the ball around while setting screens in an attempt to get a player open with a clear path to the basket or for an open shot attempt.

“We knew we had to try to pull those big guys away from the hoop or we were never going to get anything….we were patient enough and disciplined enough to keep running it until we found good shots that we could hit,” Scheck explained.

Even though the approach they were using worked well at getting players open, shots did not fall for the Spartans early in the game.

Berthoud began the game by missing their first six shots from the floor. Junior Tucker Skoric finally broke the ice for the Spartans by sinking a jump shot at the 4:45 mark in the first period. Junior Quinton Urchek and senior Zach Ruebesam each added a three-pointer as Berthoud tied the game at 12 by the end of the first.

The Spartans opened the second period as strongly as they had closed the first. Berthoud drained three-pointers on three consecutive possessions as Urchek sank two and junior Alex Santos added a third to give Berthoud a relatively comfortable 23-14 lead by the 5:45 mark.

In the third period, it was again Ruebesam’s turn to do some damage with his shooting. The senior guard made good on a pair of treys as Berthoud out-scored Highland 12-6 in the period to take a 12-point lead, 44-32.

The fourth period was atypical as Berthoud made only one basket from the floor but sank 21 of 24 free-throw attempts; the Spartans had attempted only five foul shots in the previous three periods 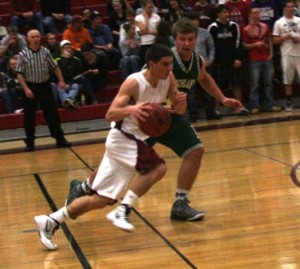 combined. Berthoud’s near-perfection from the stripe in the fourth put an exclamation point on the victory as the Spartans out-scored the Huskies 23-13.

Asked about the importance of the free throws late in the game, Coach Scheck said, “If we’re missing those free throws and they go down and get buckets that 12-point lead we were sitting on when they started to foul goes down mighty quick. We work on (free throw shooting) a lot, we stress it, it’s important, and tonight they fell for us.”

It was not only a solid shooting effort that won the game for Berthoud. The Spartans made effective use of their full court press and zone defense to create turnovers and prevent the Huskies from getting many good looks to score. Much like the strategy they employed offensively, the Spartans entered the game with a plan on how to defend Highland that negated their size advantage.

Said Coach Scheck, “Last year in the second game (against Highland) full-court pressure is kind of what turned the tide for us so we wanted to do that again, get to their guards a little bit and really make them work and then hopefully take some of their bigs out of the game.”

The Berthoud High girls basketball team also had their way with Highland. Playing in Ault, the Lady Spartans topped the Lady Huskies 48-25. The victory was fourth straight and improves the team to 9-6 on the season and 5-2 in Patriot League play. The Lady Spartans will return home on Friday evening for a matchup with Estes Park.