The Berthoud High boys basketball team stomped the Estes Park Bobcats 69-47 Friday evening in the Berthoud High gym. The win snapped a two-game losing streak and improved the Spartans record to 6-9 on the season and 4-3 in the 3A Patriot League.

Junior guard Zach Ruebesam was the star of the game for Berthoud. Ruebesam led the Spartans with 29 points, shooting 9/15 (60%) from the floor and 9/13 from the free-throw line. He was an equally strong force on the other end of the floor, swiping a game-high six steals and adding two rebounds. “He’s making good decisions and shooting a lot of good shots for us,” Berthoud Head Coach Pete Scheck said of Reubesam’s performance and added, “The other guys are smart enough to recognize when he gets hot and feed him the ball.”

The sub-zero temperatures and subsequent school cancellations this past week forced the postponement of all BHS sporting events scheduled for Tuesday and Wednesday. Thus the Friday evening contest with Estes Park was the first game the Spartans had played since their 73-38 loss to Niwot last Saturday. When asked if he was concerned going into the game about the team being rusty, Coach Scheck said, “There was a lot of concern on my part….until last night we hadn’t practiced for a week, but our effort tonight was good.” The game versus Highland that the Spartans were scheduled to play this past Tuesday will be made up on Friday, February 11th.

It did not take the Spartans long to knock off what small amount of rust had accumulated with the six-day layoff. Berthoud took control of the game early going on a 9-2 scoring run in the opening 6:16 of the game. Ruebesam led the way for the Spartans from the get-go with four buckets in the first period. The Spartans’ shooting went cold late in the first quarter and the Bobcats were able to battle back to within three by the end of the period.

Berthoud made use of the full-court press for much of the first period and in doing so were able to force some Estes Park turnovers but also allowed the Bobcats to get some quick scores. “We got away from (the press) because I felt like we were giving them too many easy baskets.  But it’s something we need to be able to use so we have to continue to work on it,” Scheck explained. 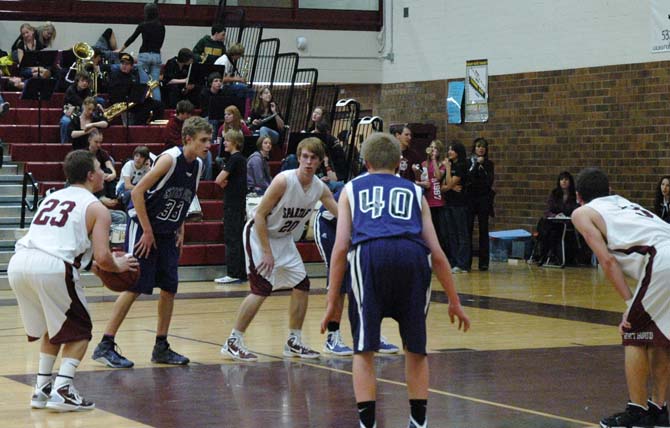 [1]
Junior Zach Ruebesam spent a lot of time at the free throw line in the 4th quarter.

After a back-and-forth second period the Spartans held a 33-26 point lead at halftime. The third period was equally close but thanks to two three-pointers from junior forward Greg Hutchins and seven points from Ruebesam, the Spartans pushed their lead to nine, 48-39. The Spartans pulled away and in the fourth period thanks to clutch shooting from the foul line and stout defense. Berthoud out-scored Estes Park 21-8 in the final period. Ruebesam closed the game as strongly as he began it, sinking eight of his nine fourth period free-throw attempts.

The boys basketball team will be on the road next week, traveling to Keensburg on Tuesday, to Gilcrest on Thursday and then up to Ault for the make-up game on Friday. Their next, and final, home game will be held on Tuesday, February 15 when Greeley-based University High School visits the BHS gym.

The Berthoud High girls basketball team was routed 71-34 in Estes Park on Friday night. The Lady Spartans will return to Berthoud on Tuesday for a match-up with Weld Central.