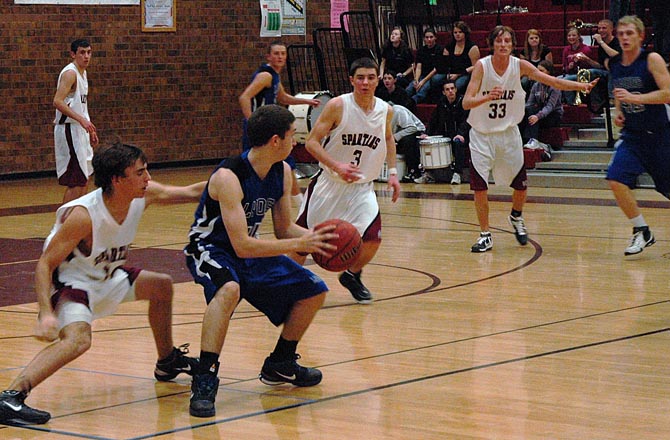 [1]
The Spartans on Defense in the third period. / Photo by Dan Karpiel

Friday night in the Berthoud High School gym the Berthoud boys basketball team won their third game of the season with a 64-45 victory over Lyons. The Spartans sank ten three pointers and went 16/16 from the free-throw line to notch their first victory against a 3A Patriot League opponent.

Berthoud junior Greg Hutchins nailed six from beyond the arc and led all players in scoring with 22 on the night. “I just shot the ball and wasn’t afraid to shoot,” Hutchins said after the game and added, “I was a little worried because I missed a few early but coach told me don’t stop shooting until I tell you to stop shooting.” The coaching paid off as Hutchins sank four of his six three-point buckets in the second half as Lyons was closing the Spartan lead.

Berthoud Head Coach Pete Scheck said that with the Spartans being a smaller team than many of their opponents he is not too concerned with his team taking their fair share of shots from three-point range. “With our size I don’t know if we have many options, we have to be able to hit the three….I think we can shoot well enough to do alright.”

The Spartans began the game with a 10-0 run thanks to opportunistic defense and back-to-back three pointers from junior guard Zach Ruebesam. Sophomore point guard Alex Santos contributed all four of his points on the night in the first period as part of Berthoud’s 10-0 start. “We have to play fast and we have to play from the perimeter and (Santos) allows us to do that.”

Lyons mounted a small rally at the end of the first period to begin the second period down by only five, 12-7. The second period started well from Lyons’ perspective as well when five Berthoud shot attempts literally went in-and-out of the basket. Yet thanks to the first two of Hutchins’ six three-pointers as well as buckets from Ruebesam, junior Mic Nienaber and senior Cameron Botts, Berthoud took a 30-19 lead into the locker room at halftime. The lead could have been a lot larger for Berthoud had lady luck done her part.

The third period was relatively sloppy by both sides but Hutchins, Ruebesam and junior Jesse Queen each contributed a three-pointer and the Spartans maintained their 11-point lead, 40-31. The Spartans took control of the game in the fourth period; Hutchins added another three from downtown and Spartans outscored Lyons 23-15.

The story of the fourth quarter, in addition to Hutchins’ stellar three-point shooting, was Berthoud’s perfection from the free-throw line. The Spartans went ten-for-ten from the line with Botts sinking six and Ruebesam adding another four. When asked if free-throw shooting was something Berthoud has been working on Coach Scheck said, “We work on it all the time so this how it feels it should be.”

The Spartans will play the Eaton Reds in Berthoud on Tuesday, January 18 before making the long trip up I-76 for a contest against Brush next Friday.

The Lady Spartans also triumphed in their Thursday night game in Lyons. The final in that bout was 37-31/