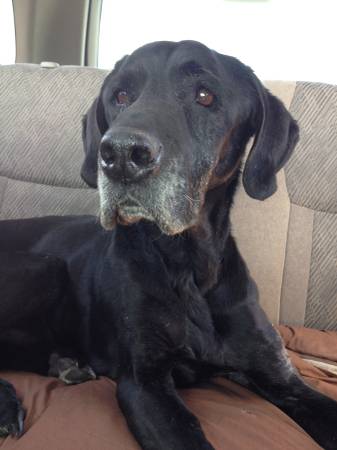 [1]Black Lab went missing from Berthoud Estates on 5/25 between 10:00am and 4:30pm. He is wearing identification, but nobody has called. Signs have also been placed around the area.He is extremely skinny, and I am worried that someone has found him and decided that his owners don’t deserve to have him because of his current condition. He was rescued only a couple of weeks ago, nearly starved to death, but he was in great hands in a great home that loves him and wants him back.Please, if you’ve seen him, call or email immediately and we’ll pick him up. He is very friendly but hard of hearing.The first 4 photos are of shortly after his rescue, and it’s clear that he’s been neglected. The last photo was taken last week, and the significant weight gain is obvious despite the blurry photo.Any information is appreciated. He has had a hard life and deserves to live out his golden years with his new, loving family.