A three-week layoff did not affect the Berthoud High girls basketball team on Friday night as they topped Mead 50-34 in the Berthoud High School gym. The victory was the Spartans third consecutive and improves the team’s season record to 6-2. Mead was the first 3A Patriot League opponent Berthoud has faced this season. 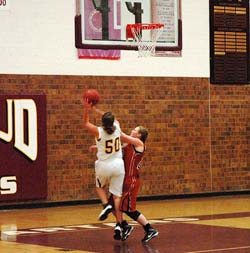 [1]
Amy Loberg shoots a layup in the 1st period

“We did a lot of things very well tonight, we didn’t hurt ourselves with a lot of turnovers and played sound,” said Berthoud Head Coach Randy Earl after the game. The Spartans played effectively on both ends of the floor, shooting 43% from the field and committing only nine turnovers. Berthoud senior Danielle Wikre led the Spartans in scoring with 11 points on the night, nine of which came from beyond the arc. When asked about her hot hand from three-point range Wikre said, “I just remembered to relax and focus.”

The Lady Spartans were especially dominant throughout the first three periods of the game, taking a 45-18 lead into the final period before getting out-scored 16-5 in the fourth period. Berthoud has struggled at times this season when opposing teams use the full-court press but they appeared to find an answer on Friday night. “We’re getting more comfortable with some things we’re trying to do as far as the press is concerned” Earl said. The Lady Spartans were effective beating the press with quick ball movement and crisp passing. So effective were Lady Spartans’ press-breaker plays, that Mead abandoned their press after the first period and 16-8 Berthoud lead.

[2]
McGinn steals in the third period

Berthoud notched eight steals on the night, leading to several fast-break opportunities and easy lay-ups. Wikre led the Spartans with three steals and seniors Megan McGinn and Julia Perry each added two. Thanks to the stout defense, Berthoud held Mead scoreless for the first 4:27 of the second period and took a 30-12 lead into the locker room at halftime.

The Spartans kept the pace up in the third period, beginning the second half with a 9-1 scoring run. Even with a commanding 39-13 lead midway through the third period, Coach Earl urged his team to keep up the pace. That’s exactly what the Lady Spartans did as they ended the third period with a 27-point lead. “We ran the offense a lot better tonight,” Earl said. Berthoud played with much more vigor and at a faster pace than Mead on Friday night. High-energy junior forward Dillon Fagler tallied a team-high seven rebounds for the Spartans and Perry set-up her teammates’ scoring opportunities with seven assists.

The Lady Spartans have their next two games on the road in Lyons on January 13 and in Eaton on January 18. Their next home game comes on January 21 with a match up against Brush.