Snow, cold and a two day postponement of the game did not affect the Berthoud High girls basketball team on Thursday night as they toppled the Highland Huskies 46-21. The contest, originally scheduled for Tuesday evening, was the Lady Spartans 11th victory of the season and their fourth in the last five games. The win improves Berthoud to 6-1 in the 3A Patriot League with four games remaining. 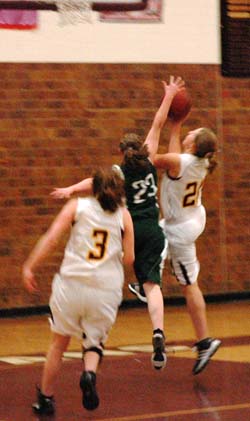 “Defensively we were pretty much okay,” Berthoud Head Coach Randy Earl said after the game. The 21 points the Spartans allowed was their lowest of the year and a marked improvement from the 56 they surrendered to Niwot last Saturday. Berthoud did not allow Huskies to reach double-digit points in any period, allowing three, four and seven twice in the four periods. Highland did not make their first basket from the field until the 0:09 mark in the first period.

“Offensively we didn’t shoot like we normally do,” Earl said. The Spartans could have increased their margin of victory substantially but struggled from the free-throw line sinking only 12 of their 29 attempts. “That’s not going to cut it,” Coach Earl said of Berthoud’s below-average free throw shooting and added, “but we pushed the ball up the floor well and did a good job getting the ball into the low post off our fast break.”

The Spartans out-scored the Huskies in each period of the game. After beginning the game with 10-1 scoring run Berthoud kept the pedal to the metal and added 13 more in the second period. The Spartans took advantage of their fast break opportunities and appeared to wear out the Huskies. In the second half the Spartans made ten trips to the foul line as Highland began fouling Berthoud more often. After out-scoring Highland 12-7 in the third period and beginning the fourth period with a 5-1 run, coach Earl opted to pull out most of his starters. Earl said after the game he wanted to give the starters a little rest as Berthoud plays again on Friday night. 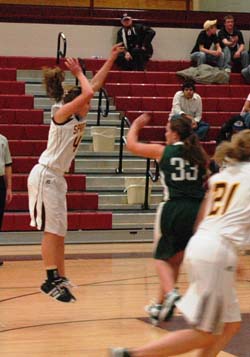 Senior forward Julia Perry has been Berthoud’s leading scorer this season averaging 10.5 points per game and Thursday night was no different; Perry led the Spartans with nine points. Fellow seniors Tanya Bezanson and Danielle Wikre each contributed eight. “I think we did really good tonight not having had practice the last three days,” Bezanson said.

The Lady Spartans do not have a day off and will travel to Estes Park for a 7pm contest with 8-6 Bobcats. The boys basketball team, whose contest with Highland has been re-scheduled for Friday, February 11, will take face Estes Park tonight at 7pm in the BHS gym.