Lady Spartans win their fourth game of the season

Saturday night the Berthoud High girls basketball team posted a win in their final game of the Spartan Basketball Invite with a 42-28 thumping of Northridge. The victory was the Lady Spartans’ fourth on the season but only their first of the past week’s tournament. Like the previous two games for Berthoud, Saturday night’s contest was one-sided but this time in the home team’s favor.

The Lady Spartans out-scored the Grizzlies by 12 points in the combined second and third periods. Led by Senior Julia Perry, who scored 12 of her team-high 16 in the second and third periods, the Spartans took control of the game. Perry’s shooting was hot from every area of the court. When asked about her performance and finding a rhythm she said, “Yeah, I could just feel it.” Berthoud took a 20-13 lead into halftime and extended it to 31-17 by the end of the third period. Senior Megan McGinn contributed 12 points, 10 of which came in the second half of the game as the Spartans pulled away.

Northridge junior Kaylyn Smith was by far the most dominant player for the Grizzlies. Smith accounted for 17 of the Grizzlies 28 points as her team’s primary ball-handler. Berthoud was routinely rotating their defense in Smith’s direction and doing all they could to limit the damage.

Berthoud Head Coach Randy Earl was pleased with his team’s performance, but was careful to mention that the team still needs to improve in several areas. “I thought we played a little better tonight but we were really sloppy in the first half and just did not handle the ball very well. In the second half we cleaned it up a little bit and looked a little bit better offensively,” Earl said after the game. Perry echoed her coach’s comments saying, “We had too many turnovers and were sloppy for most of the first half but there in the second quarter we started to put it together, in the second half we really got rolling.”

Berthoud swept all three games of last week’s Frederick Tournament but was in danger of losing all three games in the Spartan Basketball Invite. With Saturday night’s victory the Spartans improved to 4-2 on the season. “I know the competition was a lot better this week (compared to the Fredrick Tournament) but I thought we should have played better in the first two games,” said Earl and added, “I don’t think we’re quite where we need to be yet.”

The Lady Spartans will host Denver-based Bishop Machebeuf on Saturday, December 18 for their final game before the three-week winter break. 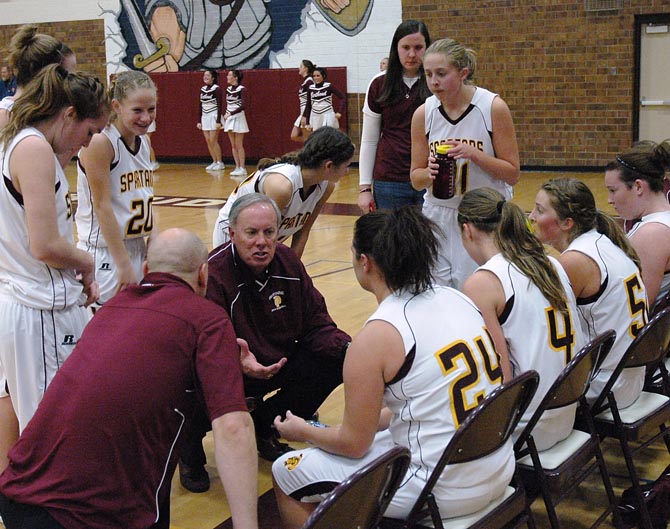