In a peculiar game that saw the two teams combine for 25 points in the second period and then only two in the third, the Berthoud Spartans girls basketball team topped the Strasburg Indians 39-30 in the Berthoud High gym on Tuesday evening. The victory improves the Lady Spartans to 9-3 on the year and 4-1 in the 3A Patriot League. Berthoud remains in second place behind Eaton in the Patriot League. 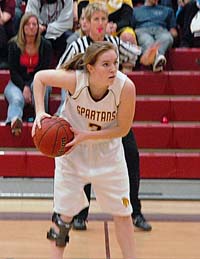 “It’s a win and we will take it every time,” Berthoud High Head Coach Randy Earl said after the game. Standout Strasburg guard Krystina Powell lead the Indians in the first period by sinking four straight shots as her team jumped out to a 14-9 lead. The Spartans were impatient early in the game, often rushing shots and failing to execute their prescribed offense. Berthoud point guard Megan McGinn explained, “We talked about taking care of the ball, running our offense and just not rushing things.”

The second period saw senior Danielle Wikre sink back-to-back three pointers as the Spartans went on a 9-0 run to being the period. The Spartans dominated on both ends of the floor, scoring 19 in the period and not allowing a Strasburg bucket until the 2:31 mark. “We were really working good together, we had a great flow,” Berthoud senior forward Julia Perry said. Perry contributed seven points in the period and McGinn added another four as the Spartans out-scored Strasburg 19-6 to take a 28-20 lead into halftime. 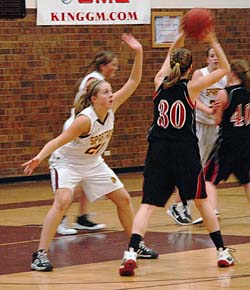 The Spartans’ offensive domination did not continue in the third period. Despite holding Strasburg to only two points, Berthoud failed to score. When asked after the game about the dichotomy in their offensive production between the second and third periods, the Spartans were at a loss for words; “I wish I knew….we missed a lot of shots, even ones in the paint,” coach Earl said.

“I think we were rushing our shots because we could get open and I think we thought that the second we got open we should score,” McGinn explained. Perry added, “We just weren’t working as hard as we were and we were too slow. Nothing was going in the basket.” Berthoud was 0/8 on field goals and 0/2 from the foul line in the third period.

Despite the struggles on the offensive end of the floor, the Spartans remained strong on defense in the third period. “We really talked about defense after the second quarter and about just shutting down their main scorers, that was the central focus,” McGinn said.

In the fourth and final period, Berthoud’s shooting improved. Junior Dillon Fagler scored four points and McGinn sank two late free-throws to give the Spartans a 39-30 victory. Nevertheless, Earl was concerned about Berthoud’s uneven offense stating, “We’ve got to get more consistent offensively, we scored 19 points in the third quarter and only 20 the rest of the game, you can’t have that.”

Berthoud will try to develop a more consistent offense this weekend with games Friday night in Kersey against Platte Valley and in Niwot on Saturday. The Lady Spartans’ next home game comes on February 1 with a contest against winless Highland. 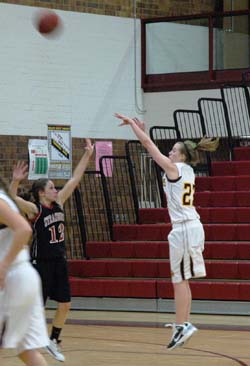