Loss drops Spartans to 0-4 on the season 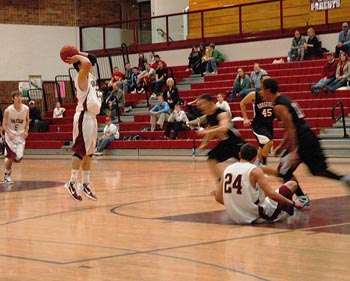 [1]
Zack Ruebesam nails a 3-pointer in the 4th period

The Berthoud High boys basketball team began their leg of the three game Spartan Basketball Invite on Wednesday evening with a 74-45 loss to the Roosevelt Roughriders. Berthoud entered Wednesday evening’s contest having lost all three of their games in the Frederick Tournament held last week. The loss drops the Spartans to 0-4 on the young 2010-11 season.

Thanks to back-to-back three-pointers from senior Sam Hardy, Roosevelt opened the game with a 10-2 scoring run. The Spartans would answer back with two three-pointers of their own from junior Gregory Hutchins. The Spartans tied the score at 14 all before allowing Roosevelt to score the final seven points of the period. The Spartan’s shooting woes continued into the second period as Berthoud failed to put any points on the board until the 5:15 mark, nearly half way through the period.

The Roughriders applied the strategy of frequently using a full-court press in the first half. “We haven’t seen a lot of it….but after I watched their (junior-varsity) play I thought there was a good chance we’d see it and we talked about running our press breaker,” said Berthoud Head Coach Pete Scheck. “When you get in those pressure situations with young guys all the stuff you talk about doesn’t really happen. Instead of moving the ball and passing the ball the way you want to they just dribble it,” Scheck added. Roosevelt’s use of the press prevented Berthoud from generating much rhythm offensively and led to turnovers and fast-break opportunities for the Roughriders. Roosevelt out-scored Berthoud 23-10 in the second period and took a 44-24 lead into the locker room at halftime.

Roosevelt’s dominance continued into the third period. The Roughriders out-scored the Spartans 20-7 in the period and were in full control of the game. Berthoud was able to snatch a moral victory in the fourth and final period by out-scoring Roosevelt 14-10. But it was too little, too late for Berthoud. Spartan center Cameron Botts said after the game, “we didn’t come out as strong as we wanted to and we really have to work on our defense.” Botts scored eight points on the night and added six rebounds. Junior Zach Ruebesam was Berthoud’s leading scorer with nine points to go with his team-high seven rebounds. Ruebesam was Berthoud’s primary ball-handler Wednesday night with sophomore point guard Alex Santos held out due to illness.

The Berthoud boys basketball team lost six seniors to graduation following the 2009-10 season and as a result is fielding a very young squad this year, with two freshmen and two sophomores.  “We didn’t play very smart tonight, we’re young and inexperienced and we know we’re going to go through some of that,” Coach Scheck said of his team’s youth and added, “We have to build the mental toughness of these young guys.” Botts, one of only two seniors on Berthoud’s 12-man squad, said “We have the heart, we just have to convert it to the floor.”

The Spartans will have an opportunity to mature as a team and notch their first victory of the season at 7:00pm Friday night in a contest versus Northridge. The boys will play their third and final game of the Spartan Basketball Invite on Saturday evening at 5 p.m. 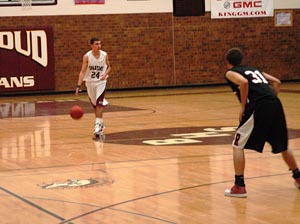 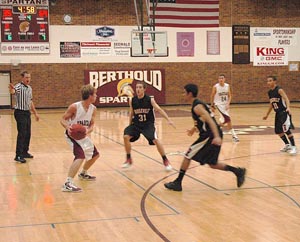