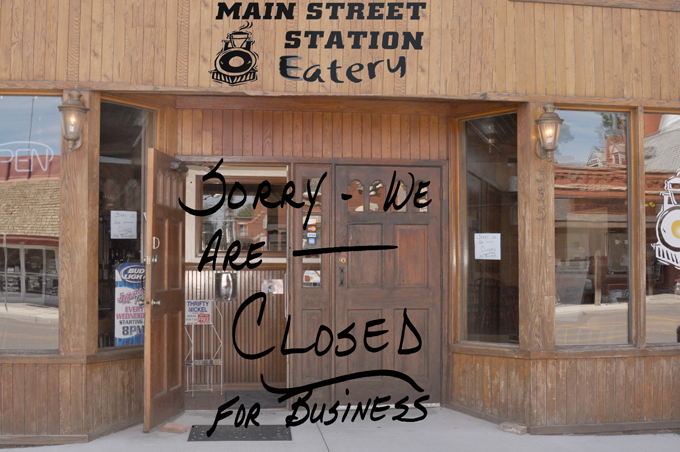 [1]
Sorry, we are closed for business say the paper signs in the window

The Main Street Station Eatery has closed after almost two years of frustration. Sharon Dowling, who opened the restaurant in March of this year, said that she had to close down the eatery due to financial difficulties.

Dowling and her family originally had leased the J. B. Clymer house in 2009, but were forced to close it when the Department of Revenue advised her that John Solliday, the owner of the building, was behind in sales and payroll taxes to the tune of $9,000. At that point, Dowling was two months behind in her rent, but had discussed the situation with Solliday and promised to catch up. According to Dowling, she and her family had also invested money for maintenance and repair of the house, which had not been reimbursed, so they decided that a move should be made. The expense of moving to the old Abeyta’s restaurant on Mountain Avenue, added to the loss of business from road construction was hard on business, but recently a default judgment was awarded to Solliday in the amount of $15,000 and Dowling cannot recuperate her losses. Her son, Ed Munholland and his wife, Shelley, will look into the possibility of reopening the business.

[2]
Martina and Ernesto Becerra stand at the counter with employees Emily Benavidez and Karla Mahan.

Santiago’s has not suffered from lack of business, but will close this Saturday due to a corporate decision. The owners, Martina and Ernesto Becerra said this was a business decision on their part and their plans are “up in the air.” The couple had operated the popular Berthoud eatery for seven years. Martina Becerra said, “ I want to thank all the customers from Berthoud for coming in and supporting us.”

The corporate office of Santiago’s has not responded to requests for information about whether the chain will keep the restaurant open with a new franchise operator.