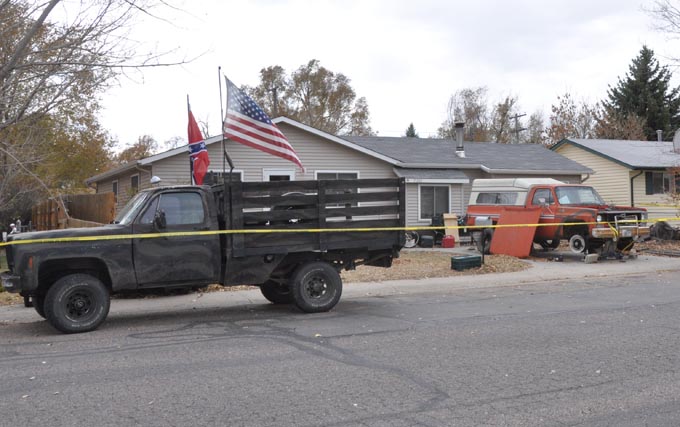 [1]
Scene of Tuesday morning shooting in Berthoud. The truck in front of the house apparently belongs to the man who was shot.

Berthoud man was shot and killed by a SWAT unit after deputies say he opened fire on them Monday night.

It’s a policeman’s worst nightmare, being called to a scene of domestic violence and finding someone with a weapon. Monday night around 9 p.m. Berthoud police responded to a call at 730 Bruce Drive. No details are available, but the man at that address was armed and the local police called for backup. The Larimer County Sheriff’s SWAT team arrived at approximately 11 p.m. and surrounded the house. They entered the back yard by coming in from Franklin Avenue. Negotiators with the SWAT team were talking to the man when he exited the residence shortly after 1 a.m. He then fired at the Sheriff’s deputies. A neighbor said he heard two shots followed by several more. Officers had returned fire, striking the suspect. The suspect was transported to the Medical Center of the Rockies where he was pronounced dead.

According to the press release from the District Attorney’s office, no officers were injured in the altercation. The incident is being investigated by members of the Berthoud Police Department, Larimer County Sheriff’s Office, Colorado State University Police Department and the District Attorney’s Office. The name of the deceased will be released by the Larimer County Coroner’s Office later to day pending notification of family.