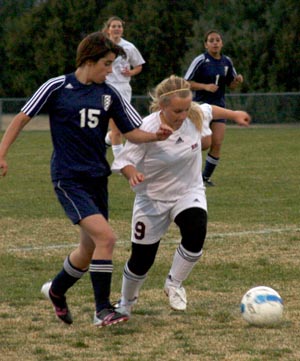 In 80 minutes of soccer on Tuesday evening the Lady Spartans held the lead for only 6:03. Yet those six minutes, most especially the final 36 seconds, proved decisive for Berthoud as they topped the Cornerstone Christian Bulldogs 2-1 at Max Marr Field.

The match progressed for more than 60 minutes in a scoreless tie as the Spartans and Bulldogs battled back and forth. Each team got some good looks and took a handful of shots in the first half but not even one could find the net. Yet, Berthoud found their groove midway through the second half and managed to score the first and last goals of the match.

With the match knotted at one and less than one minute remaining, Spartan sophomore Cherokee Walker demonstrated great footwork and ball control as she navigated past a handful of Bulldog defenders. As she raced towards the goal she spotted fellow sophomore Megan Loberg and passed the ball in her direction. Loberg gained possession, advanced a few more yards before firing the ball right between the goalposts for the match-winning score with only 36 seconds left in regulation.

“It feels real good,” Loberg said of her match-winning goal. “I just saw an opening where there was no one and Cherokee saw I was going for it, so she got the ball to me and I just tapped it in past the goalie,” was Loberg’s description of the match’s decisive play. 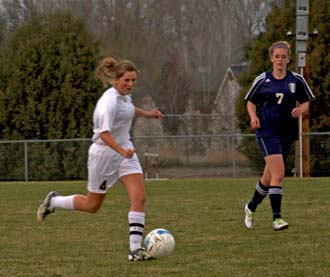 [2]
Amy Loberg works her way down the field

The match-winner was the second goal on the night scored by a Loberg. With 19:38 remaining in the second half, Loberg’s older sister Amy scored to give the Spartans 1-0 lead. Detailing her score to break the 0-0 tie, the senior midfielder said, “I dribbled around a few people and I thought about passing but I was like you know what, I’m going to go for the shot; so I shot and it went right over the goalie’s head.” Berthoud senior Kara Lind was credited with the assist on Loberg’s goal.

“It was just a great effort overall…I’m proud of the whole team, they stuck together and they didn’t give up and they really took care of business today,” said Berthoud Head Coach John Barron. Asked about the goals of the Loberg sisters he said, “Both are really great players; they were very composed and were able to finish strong for us.”

The 2-1 win over Cornerstone Christian was the Spartans’ third consecutive victory. Berthoud’s overall record on the season stands at 4-6-1 with all four wins and the one draw having come against conference opponents. The Spartans are sitting comfortably in second place in 3A Region 4 behind undefeated Mead.

Berthoud’s record and team standing are impressive considering that the team has been ravaged by injuries to several key players. “It’s not just one or two (injuries)… it’s put us at a disadvantage all season and we’re still working on adjusting everyone to our style of play and overall team tactics,” Barron explained.

The Lady Spartans will have a week to enjoy their victory as well as try to get healthier before heading out to Keenesburg to take on the Weld Central Rebels on April 19.