Mayor Patterson and Town Administrator Hart joined other Front Range dignitaries at the FLEX bus terminal in the Orchard’s Shopping Center on Wednesday morning to celebrate the launch of the FLEX Regional Transit Route.

Regionalism seemed to be the theme of the event as the mayors of the three cities and one town involved in the project promoted the opportunities that this link will provide. As the mayor of Longmont said, “We haven’t been linked like this since the stage coach.” 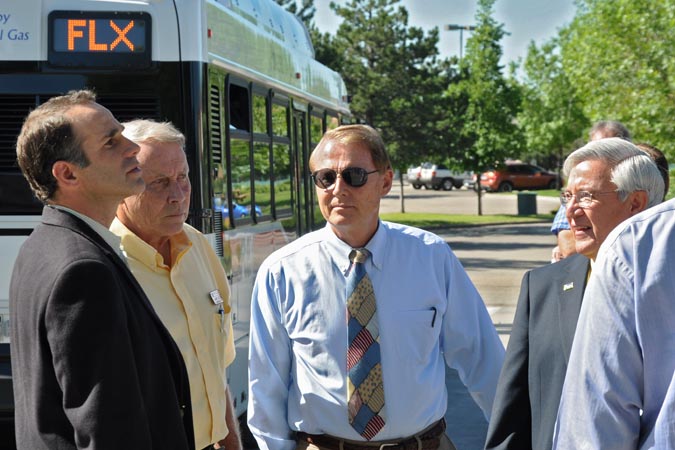 Mayor Patterson of Berthoud commented, “It does tie Berthoud directly to all the other cities around, as well as RTD in Denver. To me, this is the result of a logical progression … where we should have been probably a long time ago. By adding in the natural gas power, I like the thrust of that as well.”

Berthoud was eager to join the consortium, but finances were a problem. Patterson said that the other communities subsidized Berthoud and cut its share in half to $5,000. Additionally, Berthoud can make the payment in two installments. In his remarks to those attending, Patterson thanked the other partners for their efforts.

“Over 2,000 riders the first six days,” announced Marcy Abreo, Loveland Transit director as she officially retired FoxTrot, the Loveland-Fort Collins bus connection. All of the day’s speakers were very upbeat about the new service.

Read more in the Loveland Reporter-Herald [3]