The stage was then taken by the Turner Middle School Fire Choir. They performed James Taylor’s “Fire and Rain” and “I’d Do Anything” from Oliver.

[3]Next there was a duet by The Bridge-Between’s Rachel Hammel and Jessleyn Neuhalfen, who performed “Marry the Man Today” from Guys and Dolls.

After the duet The Mead Middle School Growl Choral entertained the audience with a jazzy version of “Jingle Bells,” then “Let the People Dance” and Journey’s “Don’t Stop Believin”.

[5]Singing a well-choreographed version of “Holding Out for a Hero” from the musical Footlose was presented by The Bridge-Between’s Katie Kourns, Amelia Servy, and Maggie Stamets. 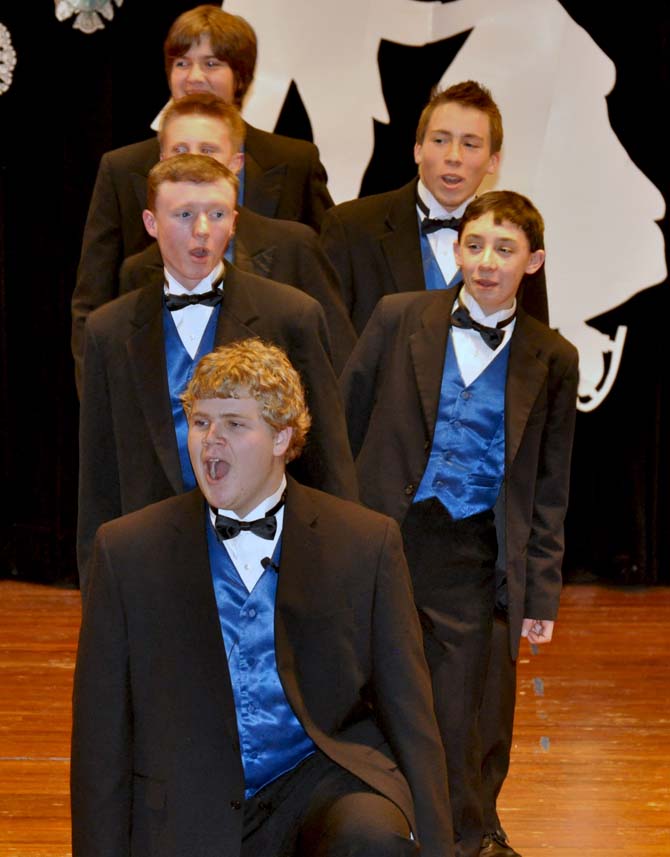 [6]This was immediately followed by several of the Bridge-Between men performing a snazzy rendition of “The Longest Time” by Billy Joel.

[7]Next, the Fire Choir, Bridge-Between and Growl Choral all took the stage for  a very professional and memorable presentation of Irving Berlin’s popular tune, “Play For Me a Simple Melody”.1251

A fifteen minute intermission was held where the audience could grab a cupcake and bid-on some lovely items that were held in the silent auction, including a base guitar.

After intermission, The Bridge Between restarted the show with a soothing melody featuring among other songs, “Let it Snow” and “Button up Your Overcoat” with soloist Maggie Stamets. Next a wintertime duet of “When Winter Comes to Town” from The Polar Express was beautifully performed by NateLee and McKenna Hawkins. 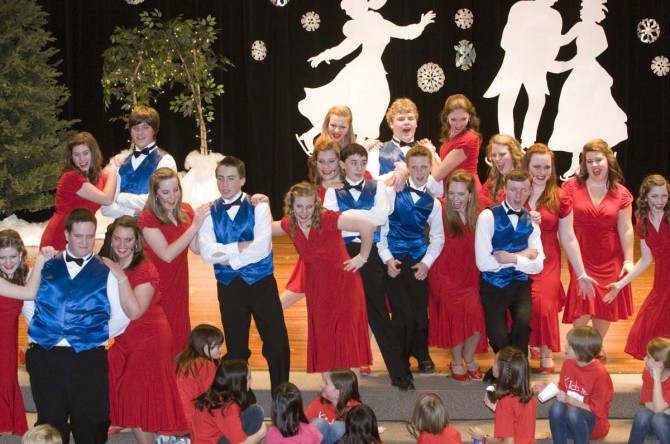 Next the full Bridge-Between Choir performed “Top of The World” by Bettis and Carpenter and “Heart and Soul” by Loesser and Carmichel. The Bridge-Between girls gave a humorous performance of “She’s in Love” from the Little Mermaid which entertained the audience with much laughter.

This was followed by the full Bridge-Between Choir singing their signature song; “A Bridge Between” with guitar accompaniment, Leigh Ann Kleber. 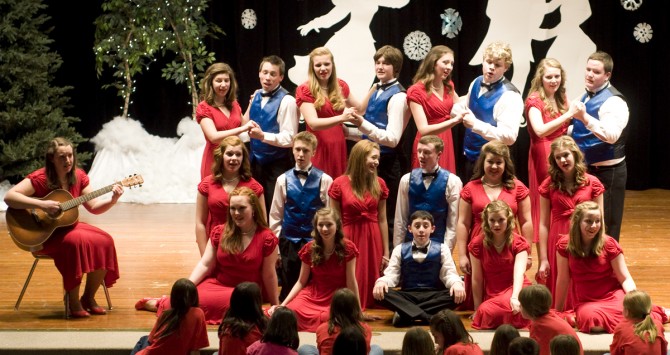 A second intermission was taken so patrons could enjoy another cupcake and place last- minute bids on items in the auction. The guitar sold for a grand $235. With the ending of the auction, the finale began. The Bridge-Between performed a rendition of “Let the People Dance”, earlier sung by the Mead Choir, and then “The Nicest Kids in Town” from Hairspray.

The concert was a fund raising event for The Bridge-Between for an up-coming competition held this April in Keystone. With over 200 people in attendance and the money raised from the silent auction, it is clear that the fundraiser was a success. The concert was a fun experience. It was exciting to see three levels of choirs all perform knowing that many of the children in The Kids in Red will enter the Growl Choral and the Fire Choir. And that some of these students will be the future stars in The Bridge-Between Show Choir.