Dye is being recognized for:

At 86 years of age, Dye keeps a busy schedule.

The festivities will take place Thursday, May 12 at 11 a.m. at the Police Officers Flood Memorial located approximately one-quarter mile east of the Big Thompson Fire station on the north side of U.S. Highway 34. 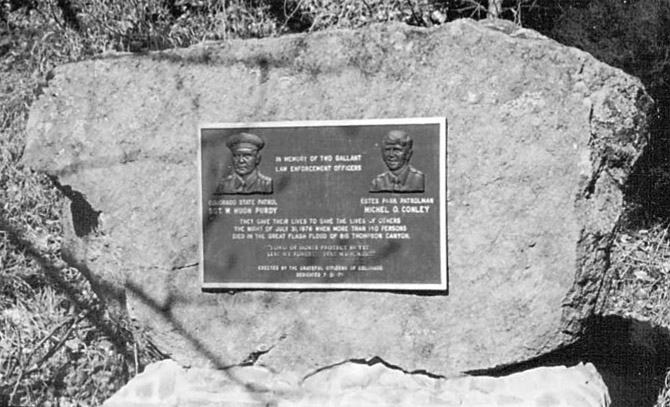 [2]This memorial, honoring police officers who lost their lives in the Big Thompson Canyon Flood of 1976, was not maintained and was filling with trash and debris until Dye decided to do something about it. For many years, he raked the leaves, picked up the trash, and kept this memorial clean and neat for visitors. It is only fitting that this scenic location was chosen to honor Dye’s efforts.

Everyone is invited to the event, the Channel 7 cameras will be rolling and we can all honor Bill Dye.

Excerpt from “Reflection on the River, The Big Thompson Canyon Flood:”

In 1978, two years after the flood another memorial was erected in memory of the two officers who gave their lives in the attempt to save others. The plaque is located across the road from where Sgt. Purdy’s car was found in a sandbar, about 1 block east of the Big Thompson Canyon Association Building. Conceived by Jesse Luna and designed by Steve Hodgin the memorial honors Colorado State Patrol Sgt. W. Hugh Purdy and Estes Park Patrolman Michel O. Conley. It was a touching moment when Sean Conley, Michel’s 10 year old son spoke to the gathering.

Purdy and Conley’s stories, as well as many more, are recounted in the book “Reflection on the River.”