In Defense of Animals released this announcement this afternoon (January 18, 3013)

IDA also offers $1,500 for a permanent memorial for slain elk

Boulder, Colo. (January 18, 2013) – In Defense of Animals (IDA), an international animal protection organization with over 100,000 supporters including 4,000 in Colorado, is expressing cautious optimism at todays announcement from the Boulder District Attorney’s Office concerning the January 1 killing of the community elk known as Big Boy. IDA revealed today that it will provide $1,500 towards a permanent memorial for Big Boy. 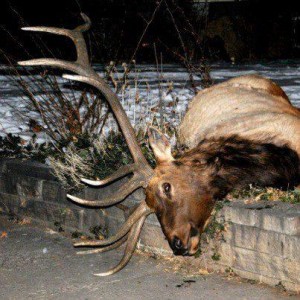 We are thrilled that District Attorney Garnett is handling this case with the gravity it deserves, and we thank him and the Colorado Division of Parks and Wildlife for conducting a serious investigation, said Rita Anderson, IDA’s Policy and Investigations Specialist who is based in Boulder. We are grateful for the more than 17,000 emails sent by IDA supporters demanding justice for Big Boy. The citizens of Colorado and the entire country stood up for the right of wildlife to share this planet with us, and today it appears that our outcry has been heard.

The elk, a friendly neighborhood fixture who was cherished and adored by the community, was killed under uncertain circumstances on New Year’s Day. Following the killing, there was a candlelight vigil and a silent walking vigil by citizens to remember the elk. The elk had been a regular and welcomed visitor in the Mapleton area for 3-4 years and was frequently seen walking silently through yards, stopping to munch on bushes. He was much loved by all who knew him and was not known to be aggressive. One neighbor said not only did the neighbors think of the elk as a friend, he felt the elk thought of them as friends.

IDA did express disappointment that the charges did not include felony animal cruelty charges. IDA maintains that the killing of Big Boy, also known as the Mapleton Elk, did merit felony animal cruelty charges, and we will continue to urge Boulder officials to add such charges, said Anderson. However, other than that, we are very happy with today’s announcement. This is a victory for wildlife and for people who care about animals.

Perhaps this shooting is illustrative of the way police view animals. The spate of killings of dogs is astounding. An internet search of “police shooting dog at wrong house” brings up several pages of incidents. The most recent incident took place nearby in Adams County.

Here are a few more incidents

There are many more examples. One had to wonder why. Have police become so jaded that the death of an animal means nothing to them. In none of these case was the animal threatening the officer. Is it possible that the police are being taught to shoot dogs. Perhaps we need to ask our own law enforcement personnel.