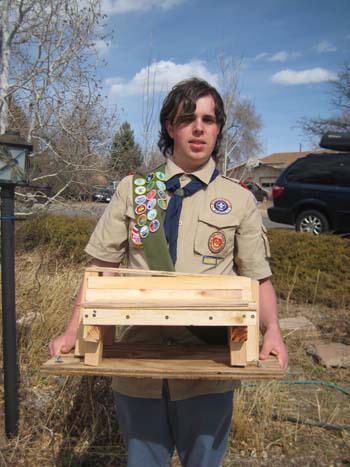 [1]Kevin Yannutz, after just three years as a Boy Scout, is working on becoming an Eagle Scout. To earn the rank of Eagle Scout requires a minimum of 21 merit badges and the planning, managing, and directing of an extensive community project. Yannutz came up with the idea for his project after he noticed several parents waiting for their children near the Berthoud Pool and having no place to sit. He has chosen is to build a public bench on the site. Kevin plans to use green materials in the construction of the bench, materials such as redwood and Trex recycled wood. “The whole world is going green so I thought I would use this as a chance to go green.” Kevin plans to direct Berthoud’s Boy Scout Troop 6 on construction of the bench beginning the third weekend in March and hopes have the bench ready for use in April. He also plans to have a recognition plaque on the bench recognizing donors. After the successful completion of this project, Yannutz will be awarded the rank of Eagle Scout and be presented with a badge and medal that recognizes his accomplishments as a scout.

Yannutz is requesting monetary donations for supplies to build the bench and the opportunity for residents to be a part of bettering the community of Berthoud. If you are interested in helping please contact Kevin Yannutz at (970) 532-2707 or you can write to: 305 Bothun Rd. Berthoud Colorado 80513.