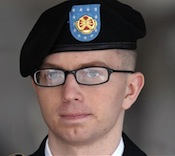 [2]The military trial of Army whistleblower Bradley Manning at Fort Meade, Maryland, began Monday with the defense and prosecution presenting starkly contrasting accounts. Manning is accused of giving a cache of diplomatic cables and government documents to WikiLeaks in the largest leak of state secrets in U.S. history. The military prosecutor, Captain Joe Morrow, accused Manning of “dumping” hundreds of thousands of documents “into the lap of the enemy,” and painted a picture of close ties between Manning and WikiLeaks founder Julian Assange. Manning’s defense lawyer, David Coombs, said Manning wanted to reveal the human cost of the wars in Afghanistan and Iraq. “He believed [the leaked] information showed how we value human life,” Coombs said. “He was troubled by that. He believed that if the American public saw it, they too would be troubled.” We’re joined by Michael Ratner, president emeritus of the Center for Constitutional Rights and a lawyer to Julian Assange and WikiLeaks. Ratner attended the opening session of Manning’s trial.

This is a rush transcript. Copy may not be in its final form.

AARON MATÉ: The military trial of Army whistleblower Bradley Manning is underway. Manning is accused of providing more than 700,000 secret U.S. government documents and cables to WikiLeaks, the largest disclosure of state secrets in U.S. history. Manning faces more than 20 charges, including violating the Espionage Act and aiding the enemy. He has already pled guilty to 10 lesser charges of misusing classified material.

The trial began Monday with the defense and prosecution presenting starkly contrasting accounts. Manning’s defense lawyer, David Coombs, said Manning wanted to reveal the human costs of the wars in Afghanistan and Iraq. Coombs said, quote, “[Bradley Manning] believed this information showed how we value human life. He was troubled by that. He believed that if the American public saw it, they too would be troubled.”

AMY GOODMAN: Army prosecutor Captain Joe Morrow accused Bradley Manning of aiding the enemy, including Osama Bin Laden, who allegedly accessed some of the classified State Department cables after they were published by the website WikiLeaks. Morrow said, quote, “This is a case about a soldier who systematically harvested hundreds of thousands of classified documents and dumped them onto the Internet, into the hands of the enemy—material he knew, based on his training, would put the lives of fellow soldiers at risk,” he said.

Coombs responded by arguing that Manning was selective, saying, quote, “He had access to literally hundreds of millions of documents as an all-source analyst, and these were the documents that he released. And he released these documents because he was hoping to make the world a better place,” he said.

The trial is expected to run to the end of August. Supporters of Bradley Manning gathered outside Fort Meade as the trial opened.

BROOKS BALLENGER: Bradley Manning did a very courageous thing. He told the American people and the world about what was going on in Afghanistan and about misinformation and distortions that were used to convince people that we should be in this war and that it was a just war and that we were helping the Afghan people, and a bunch of other misdeeds that the U.S. was doing. And I think that was a service to the country.

Today begins the court-martial of Private First Class Bradley Manning, Wikileaks’ source inside the US military. Because Manning was arrested over three years ago, the global news media have already written much about the young soldier from Crescent, Oklahoma. And though news accounts have frequently gotten the facts right (he’s 25, was deployed to FOB Hammer in the Mada’in Qada desert of Iraq, is 5 foot 2), most reports have written about the big issues that collide in this case without the slightest sense of context and perspective, leading to all kinds of basic errors and distortions—for instance that the leaks were “top secret”; that Wikileaks is on a “utopian” quest for “total transparency,” that Manning did what he did not for political but for psychological (or sexual!) reasons. As Pfc. Manning’s court-martial proceeds over the next three to four months in Ft. Meade, you can bet that media reports will continue to put across the same funhouse distortions. So to kick off my blog coverage of the court-martial for The Nation, here’s a quick debunking trip through the thickets of folklore that have sprung up around this case.

First, it is routinely asserted or implied that Manning declassified the field reports and diplomatic cables because he is a nut job, or because he is gay, or because he is a gay nut job. In fact, Manning’s motive was expressly political: “I want people to see the truth…regardless of who they are…because without information, you cannot make informed decisions as a public.” People can disagree about the consequences of Manning’s leak, but his motive for declassifying the documents is plainly stated, and it has nothing to do with his mental health or sexuality. As former infantry soldier Ethan McCord (seen through the helicopter gunsight camera in the leaked “Collateral Murder [6]” video rescuing wounded children from a shot-up van) wrote, to fixate on Manning’s sexuality “erases Manning’s political agency [7].”

Another common smear, Myth #2, is that Bradley Manning and Wikileaks are “utopian,” probably the worst curse word in educated English, carrying as it does connotations of extremism and intolerance wrapped in naïveté, or “idealists,” almost as bad. But is there anything “utopian” about declassifying less than 1 percent of what Washington classifies in a given year (92 million documents at last count [8])?

The Bradley Manning Enemy List [11]
Posted by Amy Davidson
Among the stranger aspects of the court martial of Bradley Manning, the Army private who is accused of giving hundreds of thousands of classified files to WikiLeaks, is the prosecution’s idea of what it means to aid our enemies. This is one of the most serious charges against Manning. In an opening statement, Captain Joe Morrow, an Army prosecutor, promised that “the evidence will show that the accused knowingly gave intelligence to the enemy.” Morrow proceeded to say, according to a preliminary transcript assembled by trial observers, that Manning and other soldiers had been warned about WikiLeaks in their briefings: he should have “understood the nature of the organization.” Does that mean that WikiLeaks was the enemy Manning spoke to and helped? Not quite. Morrow continued:
You will hear that enemies of the United States reviewed information provided by P.F.C. Manning. You will hear evidence that during the raid that killed Osama bin Laden government officials collected several items of digital media. On one of these items of digital media was the entire CIDNE Afghanistan database released on WikiLeaks as well as Department of State information.