Domestic Spy Program Remaining In Place Thanks to Legal Bribes [2] 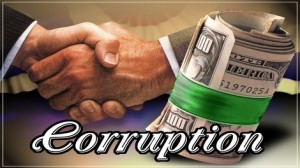 The recent failure of Congress [3] to reign in the domestic surveillance capabilities of the NSA wasn’t split along party lines; instead, the 217-205 vote was split along which congresspeople get paid more by the defense industry. You probably won’t be surprised to learn that those getting more money from the defense industry voted against cutting that power back.

Our government is deeply corrupt on a federal level. This corruption is not hidden. It isn’t illegal. And what’s more is that it doesn’t seem to be changing anytime soon. I’m talking, of course, about campaign contributions by big business and special interests, creating a conflict-of-interest for politicians that are supposed to be representing the needs of their constituency. Unfortunately, the elections we vote in to pick our candidates are only the second set of elections — you never hear about the first, because you don’t have any say. The first election comes when the candidate is calling to get money to run their political campaign. On the national level of politics, campaigns cost millions, and it takes big backers to have any shot of victory. You don’t have to win the money competition, but you have to do extraordinarily well in order to compete.

That need for campaign donations to remain in office creates a system where even the “good” politicians in Washington that wish to represent your wishes are constantly bombarded with conflicts-of-interest when it comes to voting. They need the money just as badly as votes to stay in office. And that’s why this corruption isn’t along party lines, either, nor is it a byproduct of having two dominant parties. Indeed, a third national party could actually compound the problem by making major races more competitive, making even more money necessary for advertising and causing politicians to rely on their campaign donors even more.

And that’s why the recent vote on the Amish amendment to the H.R. 2397 Department of Defense Appropriations Act of 2014 failed.