Larimer County Sheriff, Jim Alderden, presented “Sheriff’s Budget 101” to an interested audience on Friday evening. Alderden was pleasantly surprised at the number of people who showed up. Last year’s attendance was three he said, this year two dozen people showed up including department employees and of course the five candidates for the Sheriff’s job. In last week’s Bulls-eye the sheriff said, “It has been painfully obvious from listening to the campaign rhetoric that most of the candidates running for the Office of Sheriff have no idea about how the budget works.” Read all his comments here: Sheriff talks budget [1] 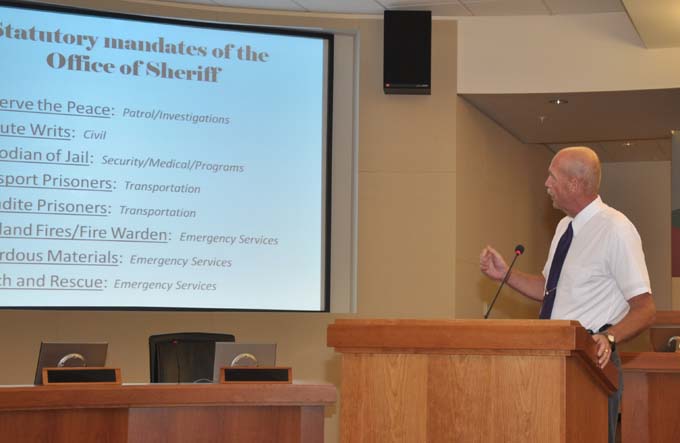 [2]
Larimer County Sheriff Jim Alderden outlines the statutory duties of the Office of Sheriff at last Friday's meeting at the courthouse.

The Sheriff explained that the Larimer County Sheriff’s Office (L.C.S.O.) has divested all non-mandated services.

The Statutory mandates of the Office of Sheriff are:

He also pointed out that Colorado Statutes make the Sheriff personally liable for any expenses beyond his appropriation from the county.

The county commissioners have already mandated a reduction in the Sheriff’s budget and with the US Marshal not using the jail, the reduction is $558,000. He outlined steps already taken to reduce costs:

If amendments 60 and 61, and proposition 101 are approved by voters in November, the cuts will increase five fold as nearly $1.8 million will need to be cut.

For reference on these proposals:

Of the four service categories, the operation of the jail takes over half the operating budget; $23,462,446 in 2010. Law enforcement was next at slightly less than $15,000,000 with emergency services and civil services a little over 1.2 million.

Alderden stressed that since payroll accounts for 85% of the budget, any cuts will have to look at reducing personnel and adequate staffing is needed 24 hours a day, 7 days a week in most positions.

Using the jail as an example, Alderden said experience has shown that when the staffing is reduced, suicides go up. “You can count on a two million dollar lawsuit any time there is a suicide,” he said.

On the law enforcement side, Alderden said that county residents want to know that a deputy will come when they call 911. Reduced budget means reduced services.

After outlining the process and answering questions, primarily from the candidates, the Sheriff asked several times if there were any suggestions on how to further cut the budget. None were forthcoming, though some candidates asked to participate in the process.

No mention was made at this meeting about the “jail sales tax” which will drop from 0.2 percent to 0.15 percent in 2012 and disappear entirely in 2015. The next sheriff will be facing a large reduction when the tax sunsets.