In their final home game of the 2010/11 regular season, the Berthoud High boys basketball team fell to the University High School Bulldogs 47-44. The loss is the Spartans’ fourth consecutive and drops the team to 6-13 overall and 4-7 in the 3A Patriot League. With the loss, the Spartans finished the regular season in tenth place in the twelve-team league and will take on a yet-to-be-determined opponent on Friday in the opening round of the district tournament.

The Spartans battled the Bulldogs all game long but came up short in the end. Midway through the fourth period, Berthoud trailed by a 40-31 score and were able to rally to within one, 45-44 with 2:04 remaining in the game. The rally was too little, too late for Berthoud as University held on for a 47-44 victory. “I’m proud that they were able to dig out of that hole, down by 11 and we were able to get it within one…. but in the end we just couldn’t get a couple of those shots to fall,” said Berthoud High Head Coach Pete Scheck after the game. 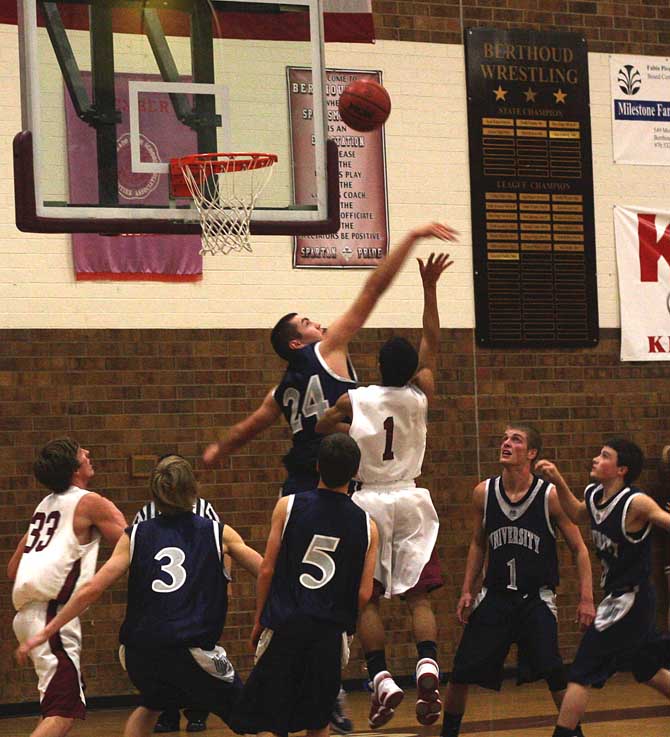 [1]
A heavily guarded Alex Santos attempts a layup in the 2nd period.

Unlike in their recent contests, the Spartans were able to keep the score close for the duration of the game. A back-and-forth first period ended with the score tied at 9 after four Spartans contributed points. University senior Jake Winn, who led all scorers on the night with a whopping 25 points, added a pair of three-pointers in the beginning of the second period as the Bulldogs went on a 6-0 run. Berthoud was able to rally and pull to within four points at halftime, 23-19. Spartan Sophomore point guard Alex Santos provided the spark for Berthoud in the period as he scored seven points in the final four minutes.

Berthoud’s field goal shooting ran hot-and-cold on the night; Berthoud finished the game having shot only 14/42 (33%), including 3/14 from the three-point range. The Spartans’ shooting in the third period was particularly poor as junior forward Luke Reed sank the only two Spartan field goals in the period. Berthoud was able to somewhat make up for their poor field goal shooting by going 5/6 from the free-throw line. At the end of the third period the Spartans trailed by only four, 28-34. “We’re just not shooting the ball very well and that’s making it awfully difficult for us,” Scheck said. 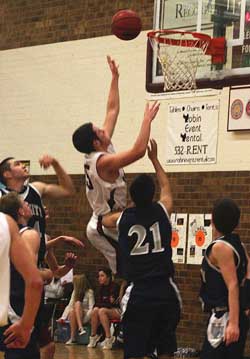 Berthoud played their best basketball of the night late in the fourth period. After University opened up an eleven-point lead, junior standout Zach Ruebesam sank his only three-pointer of the game, juniors Luke Reed and Mic Nienaber and senior Cameron Botts each added a basket as the Spartans battled back. “It was 41-30 and we could have packed it up and left but we fought back and that shows a lot of team character. I was proud; the guys really fought hard,” said Botts.

Nienaber then added a pair of free-throws as Berthoud got the game to within two. Even with the Berthoud High student section on their feet, cheering and chanting loudly enough to shake the bleachers in the BHS gym, the Bulldogs were able to score on each of their next two possessions and maintain their precarious lead. Another pair of late Nienaber free-throws and the first and only three pointer of the night from junior Greg Hutchins were just not enough as the Bulldogs closed out the game with a 47-44 victory.

On the night, both Berthoud seniors were dominant forces on the defensive end of the floor. Botts snagged twelve rebounds for the Spartans and Josh Krokowski swiped a team-high three steals. Reed led Berthoud with eleven points and Nienaber, who was 6/6 from the foul line, added another eight. 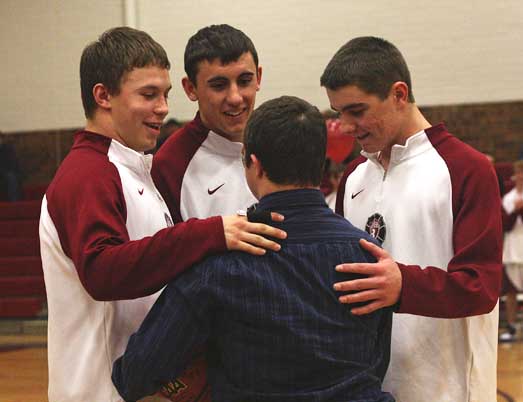 Before the game, the Spartans honored their two senior players and senior cheerleader Michelle Hanford. The Spartans also honored senior manager Travis Rice, who has Down’s syndrome, and presented him with a basketball signed by the entire team.

The Spartans will play their first game of the district tournament on Friday against an opponent to be named later.