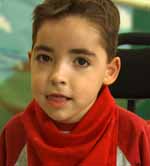 Certain Proof: A Question of Worth is a heart-touching documentary that premiered Thursday, March 31 at the 2011Vail Film Festival. The film focuses on three North Carolina children who with Cerebral Palsy fight to prove their worth. The movie introduces sweet smiling first-grader Josh, charming Colin entering third grade and spirited Kay, challenged with the middle school years. The film documents a two and a half year time period where the children and their parents battle with public misconceptions and the desire to prove to the school system that despite their physical and communicative struggles, that they are intelligent children with great worth. The minds behind Certain Proof are that of Ray & Susan Ellis, founders of Footpath Pictures Inc.

Film Director Ray and Producer Susan were initially contacted by the non-profit organization New Voices Foundation who asked them to film a marketing video. However, when the Ellises met the children and learned their story they felt that a feature length documentary would better raise awareness among the general public about cerebral palsy. Much of the film focuses on the relationship with the mothers and their children, along with the struggles the mothers go through to prove their children’s potential. When the Ellises first met the mothers of these three children, they noticed that the mothers hope had faded and they had given up on the school system. Yet making this movie helped to restore the hope that the mothers once had.

The Ellises chose Josh, Colin and Kay for this film as they believed they were at critical points in their growth and schooling. First grade being the beginning of a child’s journey in the public school system, third grade as the point in which the curriculum becomes much more difficult with having homework, and sixth grade when a student enters middle school. 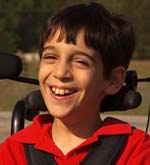 [3]Ms. Ellis said her favorite part of filming Certain Proof was that her expectations while at the start of filming was to help the kids have a voice but she later learned during filming the importance that those with cerebral palsy all communicate differently and that there is a “…very different perspective on what it means to communicate.” She questioned, “As receivers how are we communicating with them?”

According to Susan regarding the movie, “The trailer created quite a stir in the disability community because they generally are not exposed to the general public regarding their trails and tribulations of just getting your child an education.” This is the goal of the documentary: to educate the public.

“We should teach these children assuming they understand. Because when we assume they don’t understand, then we are not giving them the education they deserve… it is far less dangerous to teach them as if they understand.” Said Ray when asked about what he wants educators to learn form the movie.

Joining the Ellises at the Vail Film festival this weekend will be Kay, her mother and their dog.