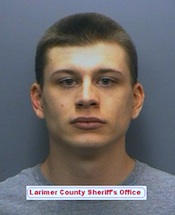 James Edward Griffin, DOB: 02/02/89, of Fort Collins was arrested yesterday (3/8/12) for two counts of Sexual Exploitation of a Child (18-6-403) for the possession and distribution of child pornography.

In February of this year, Larimer County Sheriff’s Office investigators were notified by the Loveland Police Department that they had identified an address in unincorporated Larimer County from which someone was possibly distributing child pornography. Subsequently, investigators received a second notification from the Douglas County Sheriff’s Office about the same address.

Based on the information from these agencies, a search warrant was obtained and executed which led to the arrest of Griffin. Mr. Griffin was booked into the Larimer County Jail and released on a $10,000 bond.