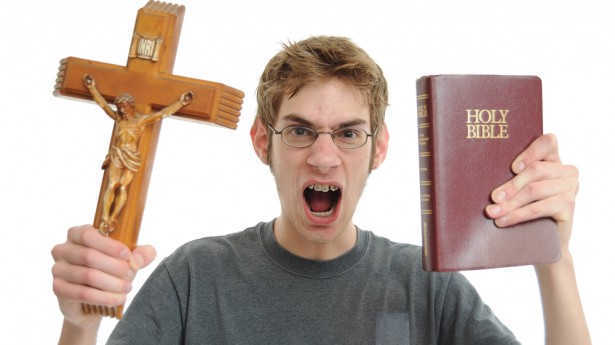 From Hobby Lobby to the Nevada rancher, members of the far right share a dangerous, anarchic pathology

The situation with Cliven Bundy of Nevada should be a no-brainer for people from both the left and the right. Bundy has been stealing from the taxpayers for years [5], illegally grazing his cattle on federal lands while refusing to pay for the privilege. Both liberals and conservatives pay taxes, so such blatant theft should outrage everyone equally. Indeed, conservative media claims to take theft from taxpayers very seriously, with Fox News spending so much time on the minuscule problem of food stamp cheats [6] that the number of minutes spent on it has likely long ago exceeded the number of pennies lost to this non-problem.

Bundy has stolen far more than any hypothetical food stamp cheat ever did, but when the government tried to show up and take what was theirs, he met them with armed resistance [7], pushing him from the “ordinary fraud” category to the “violent criminal” column.

And yet, for some reason, Bundy’s outrageous theft of services from the taxpayers is not being taken seriously by the right-wing press. As Roy Edroso of Village Voice [8] and Eric Boehlert of Media Matters have chronicled [9], the conservative response to the whole incident has ranged from minimizing the seriousness of the crime to outright cheering Bundy on in his efforts to use the threat of violence to continue stealing from the taxpayers.

It’s tempting to write this reaction off as a matter of idiocy married to identity politics. Bundy is a white guy in a cowboy hat wielding guns, which reads as “one of us” to many on the right, so they refuse to accept that he’s a bad guy no matter how much he threatens violence against federal officers simply for enforcing a law that applies to everyone. And no doubt that is part of what’s going on here. But really, what’s going on runs deeper than a knee-jerk desire on the part of the right to believe every white guy in a cowboy hat is a good guy. This is the logical extension of a push that’s grown in recent years from conservatives to argue that they, and only they, have special rights to simply disregard any law they don’t want to follow. And unfortunately that’s an argument that may be making headway this year in the Supreme Court.