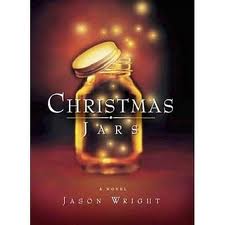 Following is a summary and an idea.

The Maxwell’s were a young couple with a delightful daughter named Hannah.  Rather than go into debt for Christmas gifts, they spent the entire year putting pocket change (and sometimes bills) into the :Christmas Jar”.  On Christmas Eve they would take the jar to the bank, cash in the coins and see what there was to spend on gifts for each other.  When Hannah was eight, she was old enough to carry the jar.  Mom and Dad led the way anxiously awaiting the grand total of the gift fund.  Unseen by her parents, Hannah noticed a young woman on a bench outside the bank.  She was cold and crying.  Hannah and her jar sat beside her.  It only took a moment for Hannah to slide the jar next to the young woman.  “Merry Christmas”, she whispered.  “This is our Christmas Jar and it’s for you”.  At this point the parents had appeared and knew in an instant what had transpired.  When Hannah joined them smiling ear to ear,  they reminded her that the jar held all they had for gifts that year.  Hannah nodded toward the young woman and explained that this year’s gift was the best ever!  The young woman used the money to make a difficult situation better and was able to give a Christmas Jar of her own to someone in need the next year.  The gift of jars spread and many recipients gave jars of their own in the years that followed.  The impact of Hannah’s Christmas Jar was immeasurable.

I’m sure we all know someone who would be blessed by a Christmas Jar.  Our family is starting one and we’re attaching an invitation to the Christmas Eve service at our church.  It thrills me to think of the ripple effect of giving that could happen!  The jar can be given anonymously.  How exciting to leave a jar on someone’s doorstep with just a note expressing how much they are loved by God!.  What a great way to remind ourselves daily that God so loved the world that He gave . . .

Since time is so short for this Christmas, perhaps groups could join together and fill a jar.  Boy Scouts, Sunday School classes, co-ops, clubs. . .

This idea of sharing is totally left up to the individual–giving someone they know could use a little hope in their lives. That’s what makes it magical and special. I’ve thought about dropping a jar in a mailbox, or letting Hays Market place a jar in someone’s grocery bag, or perhaps at the Habitat ReStore. Counselors at the schools know who families in need are–as well as churches throughout the area. What about the family in Berthoud who just lost their Dad due to the tragedy? One doesn’t need to look far to find a need.