Fox News ‘Hero’ Cliven Bundy Is a Pampered Millionaire, Not a Rugged Rancher [2]

Watching Fox rally to the defense of moneyed interests like mining and ranching is unbearable. 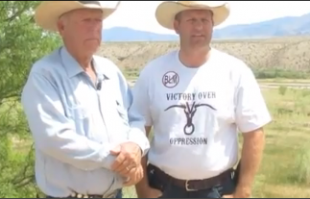 [2]The latest right-wing media poster-victim, Cliven Bundy, is just the latest in a long line of desert dwellers who thinks he or she should not have to follow the law and has a god-given right to unlimited use of public resources, in this case, rangeland.  I know the mentality well, because I grew up in rural Nevada and clung desperately to such beliefs until only a few years ago.

Bundy has not paid grazing fees in close to 20 years, while the federal government has, with painful, stupid moves, tried to somehow deal with him. Bundy also faced restrictions because he continued to graze cattle on a slice of public land reserved for the endangered desert tortoise.  He was invited to talk to Sean Hannity (of course) about the “standoff.”

“We want freedom,” Bundy said. I don’t know what freedom Bundy’s talking about. He does not own the land nor does he even pay the modest fees required to use it. Thousands of ranchers across the West pay fees for their businesses, but Bundy thinks he should get to use public resources to make a personal profit.  Cliven Bundy, far from being a patriot, is also clearly a straight-up communist.

Bundy is using the language of freedom, patriotism and outright paranoia to further his business interests. He succeeded wildly in drawing other “patriots” to his slice of contested desert. I don’t know these exact people, but the words and phrases they used were the nursery rhymes of my childhood. I’ve been listening to ignorant people bitch about the federal “gub’met,” since I could crawl, and I’m weary of it. I can’t bear to hear poor people rally to the defense of moneyed interests like mining and ranching, like well-trained, bleating sheep. As tired and silly as I find his language, clearly it worked. He so inflamed the lunatic militia movement, that many rallied to him, often from out of state, with guns and naked threats. They created a real possibility that someone might get killed, so the feds backed down.

It is asinine in our age that an armed group of idiots can thwart reasonable government action. Bundy is not a hero, a victim or innocent in any way. Just think of real injustice of America, like people spending life in jail for marijuana charges.