As pointed out last week in this publication [1], General David Petraeus’ reputation appears to be built upon a foundation of public relations sand, a foundation that is  quickly becoming quicksand. More and more publications and reporters are now beginning to take a hard look at the General and what they have written about him in the past. It appears that his greatness has been a media creation, one that he directed and fostered.

My observations in the above mentioned article are based on my observations during a 30-year military career culminating in an assignment as a staff officer for the logistics division of the Joint Staff. I have worked for and observed several generals and am quite aware of what it takes to be a Flag Officer. Quality of work can only take you so far. It takes some “politics” to get a star. Unfortunately, “politics” can carry an individual event when the quality of his work is suspect. This seems to be the case with General David Petraeus. Unfortunately, the incompetence of a general can have disastrous consequences for his soldiers/sailors/marines/airmen and the nation. How many lives has it cost to aggrandize David Petraeus.

The following two articles are the latest, but probably not the last, commentaries that judge the General on his generalship, not on his private life.

FASTIDIOUSNESS is never a good sign in a general officer. Though strutting military peacocks go back to Alexander’s time, our first was MacArthur, who seemed at times to care more about how much gold braid decorated the brim of his cap than he did about how many bodies he left on beachheads across the Pacific. Next came Westmoreland, with his starched fatigues in Vietnam. In our time, Gen. David H. Petraeus has set the bar high. Never has so much beribboned finery decorated a general’s uniform since Al Haig passed through the sally ports of West Point on his way to the White House.

“What’s wrong with a general looking good?” you may wonder. I would propose that every moment a general spends on his uniform jacket is a moment he’s not doing his job, which is supposed to be leading soldiers in combat and winning wars — something we, and our generals, stopped doing about the time that MacArthur gold-braided his way around the stalemated Korean War.
And now comes “Dave” Petraeus, and the Iraq and Afghanistan conflicts. No matter how good he looked in his biographer-mistress’s book, it doesn’t make up for the fact that we failed to conquer the countries we invaded, and ended up occupying undefeated nations. … READ MORE [3] 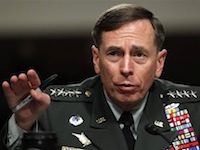 [5]Might the United States have accomplished much the same thing without putting tens of thousands more troops in harm’s way? I’d argue that it’s quite likely. But Petraeus’ hagiographers have written a history that enshrined the general as the savior of Iraq, an interpretation that he was more than willing to aid and abet.

By the time President Obama was elected, Petraeus was the Republicans’ favorite military man, a widely recognized war hero and a person often mentioned as presidential material. According to people who know him well, he liked to fuel the rumor machine that kept his name among the mentioned. He was head of U.S. Central Command, one of the military’s top jobs.

Given the fact that Bush had encouraged politicization of the military, it came as no surprise when top brass — notably Stanley McChrystal, whom Obama later fired — began pressuring Obama to send thousands more troops to Afghanistan. But it was sheer coincidence that Obama ended up appointing Petraeus to take McChrystal’s place as top commander in Afghanistan after McChrystal’s insubordination became impossible to ignore.

Obama sent more troops to that troubled land, but he insisted on a timeline for withdrawal. And when Petraeus wanted another promotion — he hoped to be head of the Joint Chiefs of Staff, according to published reports — Obama gave him the CIA instead. … READ MORE [5]