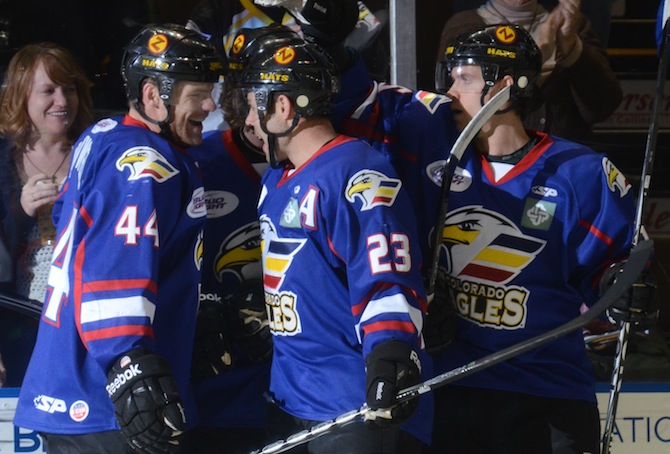 LOVELAND, Colo. – The Colorado Eagles scored a goal in the final minute of the third period to extend their contest against the Idaho Steelheads into a 3-2 shootout win.  Jerry Kuhn stopped 51 shots as the Eagles set a season high with 54, getting both regulation goals from Michael Forney in his first game back from the AHL.

Forney, who returned to the team’s roster earlier in the day after a three-game stint with the St. John’s IceCaps, scored the lone goal of the first frame at 4:56.  On the play, he stormed down the left wing before beating Kuhn with a quick shot from the left post.  Forney’s shot left the Eagles with a 7-1 edge in shots on their way to a 19-6 advantage at the end of the period.

The Steelheads put up a much better effort in the second period, out-shooting the Eagles 19-14 and out-scoring them 2-0, to take a 2-1 lead into the second intermission.

The game-tying goal came exactly midway through the second session when Matt Case’s shot from the left point was deflected past Kyle Jones by Aaron Lewicki.  Idaho then went up 2-1 with a power-play goal in the final minute of the period, coming off another deflected point shot, this time when Ian Lowe got a piece of Andrei Plekhanov’s blast.

It looked as if Idaho’s well-tested netminder would help propel the Steelheads to a win as the third period neared its end.  He came up with another strong save with just 1:30 left when Joey Sides’ shot from the left circle got past him and nearly made it past the goal line before the goalie dove back to glove it just inches short.  But with 19.9 seconds left, Forney picked up his second goal of the game by stuffing home an Aaron Schneekloth rebound at the right post, forcing overtime.

The overtime session saw plenty of open-ice play as the teams skated 3-on-3 for 1:48, with Jones making the a key save on Jacob Cepis — Idaho’s leading scorer — on a breakaway 15 seconds before the clock hit zeros, helping to force the shootout.

In the shootout, Ben Chiarot & Sides each scored for the Eagles, the former netting his second game-winner in a row (the previous one coming via a penalty shot).  Jones stopped all four Steelheads shooters.

The teams will meet again Wednesday night at the Budweiser Events Center.