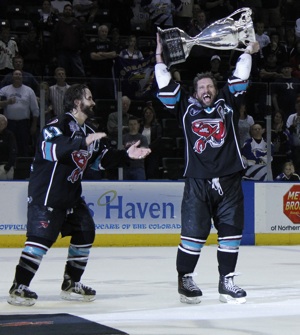 LOVELAND, Colo. – The Bossier-Shreveport Mudbugs claimed the 2010-11 Central Hockey League championship with a 2-1 win over the Colorado Eagles in Game 7 of the Ray Miron Presidents’ Cup Finals. Jeff Kyrzakos — who would net the game-winner — was named the Playoff MVP; he ended postseason play tied for first in goals (12) and game-winning goals (3).

Continuing a playoff trend, the Eagles got off to a slow start in the game’s opening session. The Mudbugs used two power plays to help build a 13-5 edge in shots in the first frame, helping them to a 2-0 lead that they would make hold up.

Just under three minutes into the game, Brett Smith dug the puck out of the right corner of the offensive zone and found Steven Crampton for a one-timer from the high slot, beating Kyle Jones stick-side, just inside the left post. The ‘Bugs scored their second goal at 7:39 when Kyrzakos found a loose puck in the crease and poked it home.

Colorado had a better second period, out-shooting Bossier-Shreveport 8-4, but they were kept mostly to the perimeter in the offensive zone and couldn’t get anything going on two power play chances (registering one shot total). John DeCaro had stopped all 13 of the shots he faced after 40 minutes of play.

The Eagles continued to get better as the game went on, winning the third period as they fought to the bitter end. After killing 43 seconds of a Mudbugs’ 5-on-3 advantage midway through, Colorado looked to get on the board at 15:07 when Kevin Ulanski deflected a Joe Grimaldi point shot past DeCaro from the low slot. However, the referee quickly waived off the goal, ruling that Ulanski had hit the puck with his stick above the crossbar.

With time winding down, Colorado pulled Jones from the net for an extra attacker and it paid off when Adam Chorneyko scored from the right circle. It was a fitting goal for the rookie who ended the 2011 playoffs as the CHL’s highest scorer (28 points). That was the last goal the Eagles could muster as the Mudbugs held on for the win.