Are George Zimmerman and Michael Dunn “protecting” us? [2] 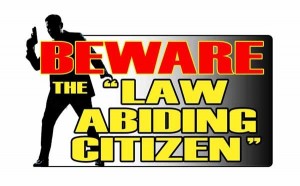 These facts unseat the pro-gun lobby’s meme that “criminals won’t obey laws” because these criminals did obey laws–and the law smiled on them. (Nor did Adam Lanza’s   mother break laws in amassing her many  weapons and regularly taking her son to shooting ranges.) So now the pro-gun lobby wants to pretend the issue isn’t the EZ procurement of guns but lack of more guns to stop the bad guys who easily procured them so easily.

The “gun-free zone” meme is not just an insult to every citizen who does not want to live in an armed society, it is an insult to law enforcement personnel who give their lives to protect us.By implying that the lack of “armed citizens” is the reason for gun deaths in a shooting, it actually equates cop wannabes like George Zimmerman and Michael Dunn (the loud music shooter) with hired and trained law enforcement personnel.

Open and concealed carriers are so full of fear, they are afraid to go where normal people go–including children, the elderly and 90 lb women–every day unless they have their loaded lethal weapons. They clearly have a mental problem. …