One tradition that’s been almost entirely forgotten now that Republicans have remade themselves into the wholly-owned subsidiary of Wall Street and other corporate interests is that older species of conservatism which was always hostile to capitalism because it celebrated greed and destroyed the stability of the community.

It is impossible to overstate how much of their own legacy and how many of their own scruples modern “conservatives” have had to jettison in order to remake themselves as the unapologetic cheerleaderss for capitalism – and not just any capitalism, but a particularly predatory species of capitalism that blindly serves the interests of the top 1% irrespective of the impact the interests of these ultra-rich have on the other 99%.

Conservatives are by temperament conservators – of traditions, of community, of institutions, of what is known over what is hypothetical and speculative. If there is a molten core to conservatism, says the late historian Samuel Huntington, it resides in conservatism’s “passionate affirmation of the value of existing institutions.” … Read More [1]

If the nation were governed by a referendum of Republican voters it would be more “socialistic” than it has been under President Obama.

The Republican presidential candidates keep calling Barack Obama a socialist. If they’re trying to invoke the Red Menace like Republicans of past campaigns, they’re a generation too late. Americans between the ages of 19 and 29 have no memory of the Cold War. Today they have a more positive impression of socialism than they do of capitalism.

The word “socialism” can be applied to a range of economic models, from Cuban collectivism to the Western European social democracies that are the home of some of the world’s most successful corporations.

But until this election came along it had never been used to describe someone who expanded the private health insurance system, let a negligent company keep control of the cleanup for an environmental disaster it caused, offered to cut retirement and elder health benefits, and repeatedly insisted that the government should cut costs. This president is less socialistic than most of his predecessors, including many Republicans.

The irony is that socialist-inspired policies are popular with Americans, including many Republicans, even if the label is not. Polls suggest that a more “socialist” Obama would also be a more popular candidate, and the same is true of his opponents.

The word “socialism” is used to describe a spectrum of possible economies ranging from the Scandinavian model, where government involvement co-exists with multinational corporations, to the more communistic Cuban model and the idealistic anarcho-syndicalism of the anti-Franco insurgents in the Spanish Civil War. … Read More [2]

A Conservative Explains Why Right-Wingers Have No Compassion [3]

A former Republican Senate Congressional staffer on why right-wingers think people without insurance deserve to die.
By Mike Lofgren February 17, 2012  |
Although Mitt Romney used the word “conservative” 19 times in a short speech at the February 10, 2012, Conservative Political Action Conference [4], the audience he used this word to appeal to was 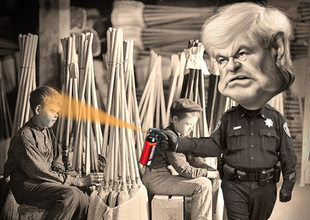 [5]not conservative by any traditional definition. It was right wing. Despite the common American practice of using “conservative” and “right wing” interchangeably, right wing is not a synonym for conservative and not even a true variant of conservatism – although the right wing will opportunistically borrow conservative themes as required.

Right-wingers have occasioned much recent comment. Their behavior in the Republican debates has caused even jaded observers to react [6] like an Oxford don stumbling upon a tribe of headhunting cannibals. In those debates where the moderators did not enforce decorum, these right-wingers, the Republican base, behaved with a single lack of dignity. For a group that displays its supposed pro-life credentials like a neon sign, the biggest applause lines resulted from their hearing about executions or the prospect of someone dying without health insurance.

Who are these people and what motivates them? To answer, one must leave the field of conventional political theory and enter the realm of psychopathology. Three books may serve as field guides to the farther shores of American politics and the netherworld of the true believer. … Read More [3]