Tales from the Pet Clinic
with Ann Hohenhaus, DVM, DACVIM 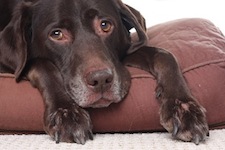 Early last week, Steel, a healthy, well cared for young Labrador, was rushed to The AMC in the wee hours of the morning for intractable vomiting.  The poor dog looked miserable with vomit on his face and paws. The emergency doctors determined he was dehydrated and started intravenous fluids along with mediations to help control nausea. They also performed a critical test when they took an abdominal x-ray.

The abdominal x-ray showed that several of Steel’s intestinal loops were over distended with gas and fluid. The distension exceeded that of normal intestinal gas and suggested something was blocking the progression of food through the intestinal tract. As he scanned the x-ray further, the radiologist saw a one and three-quarter inch long tubular object containing little bits of gas evenly distributed throughout. To the radiologist, this structure looked like a corn cob, but Steel’s family had not served any corn on the cob lately.

Shortly after the x-rays were taken, Steel was anesthetized and wheeled into the operating room where the emergency surgeon readily identified the obstruction in the intestine. …