Warriors of the Rainbow 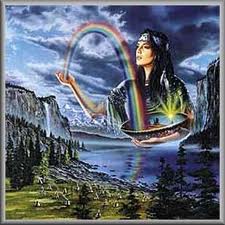 [1]Last century an old wise woman of the Cree Indian nation, named “Eyes of Fire”, had a vision of the future. She prophesied that one day, because of the white mans’ or Yo-ne-gis’ greed, there would come a time, when the earth being ravaged and polluted, the forests being destroyed, the birds would fall from the air, the waters would be blackened, the fish being poisoned in the streams, and the trees would no longer be, mankind as we would know it would all but cease to exist. There would come a time when the “keepers of the legend, stories, culture rituals, and myths, and all the Ancient Tribal Customs” would be needed to restore us to health, making the earth green again. They would be mankind’s key to survival, they were the “Warriors of the Rainbow”. There would come a day of awakening when all the peoples of all the tribes would form a New World of Justice, Peace, Freedom and recognition of the Great Spirit.

The “Warriors of the Rainbow” would spread these messages and teach all peoples of the Earth or “Elohi.” They would teach them how to live the “Way of the Great Spirit”. They would tell them of how the world today has turned away from the Great Spirit and that is why our Earth is “Sick.”

The “Warriors of the Rainbow” would show the peoples that this “Ancient Being” (the Great Spirit), is full of love and understanding, and teach them how to make the “Earth or Elohi” beautiful again. These Warriors would give the people principles or rules to follow to make their path light with the world. These principles would be those of the Ancient Tribes. The Warriors of the Rainbow would teach the people of the ancient practices of Unity, Love and Understanding. They would teach of Harmony among people in all four corners of the Earth.

Like the Ancient Tribes, they would teach the peoples how to pray to the Great Spirit with love that flows like the beautiful mountain stream, and flows along the path to the ocean of life. … Read More [1]