formerly of Loveland and Berthoud 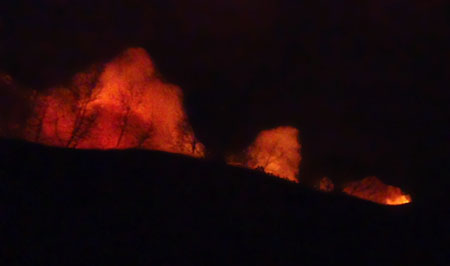 I saw smoke five miles west of my house up Buckhorn Road on Friday evening. Emergency responders kept going up the road throughout the day. On Saturday the fire burned all day, moving east with wind gusts of 70 mile per hour. Everything happened so fast, and before we knew it, the fire was on the ridge south of our house. At midnight we got the reverse 911 call. We were so grateful that our Pastor, Kelly Wheat, and his wife showed up at 1 a.m. and took our three boys. It was such a relief to have them out of the house and taken care of while we packed. I tore our house apart trying to find everything I wanted to save. It was intense. The fire moved behind the mountain behind our house on the south side. It was such an amazing and scary sight. It was like the brightest sunset you can imagine. The sky was glowing. It was so hard to take my eyes from the glow of the fire. 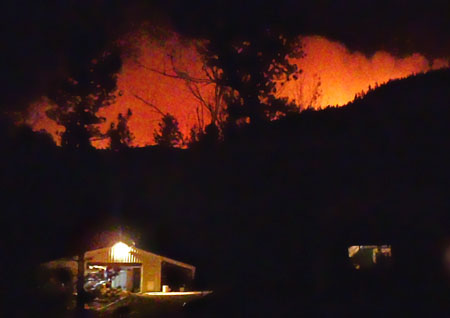 While we were packing, we heard what sounded like a bomb going off, and then saw that the flames were even bigger. We found out later that the explosion was a propane tank blowing up. We left the house at 3 a.m. and at the end of our road met a father and daughter whose house was burning. I was shocked that they had nothing in their car because, they said, they had no time. Again, we are grateful to the Wheats for opening their beautiful Sky Corral Lodge to all the evacuees and providing a place for us to sleep and eat.

We were still away on Sunday when the fire burned five of our neighbors’ homes to the ground. Those homes were on top of the mountain just behind our house. My husband drove with our neighbor to look at the damage on Wild Song Road. They ended up on a jeep trail on the ridge and were shocked to see that everything to the left (south) of the road was black and burned to the ground. To the right (north) it was untouched. That explained why the fire didn’t come over the ridge behind out house. Monday at 11a.m., the evacuation order was lifted. We came back home but did not unpack. We stayed the night while the fire burned southeast of us.

Around noon on Monday, the strong wind picked up again and it was moving the fire in all directions. Late Monday night we got a call that there was a red flag warning [3] and we should be prepared to evacuate. Tuesday afternoon we heard and saw that there were two more flare-ups southwest of us. Strong winds were blowing all afternoon. Then, around 3 p.m., we saw several areas of smoke behind us. At 6 p.m. a sheriff’s deputy came by and told us we needed to evacuate again. As we were leaving, the fire was burning on the north side of the mountain right behind our house.

With the van packed to the top with precious belongings, three boys, two cats and a German Shepard, we arrived at my parents’, Chuck and Liz Van Abbema, home in Berthoud for a much needed rest after three nights of no sleep and praying that the fire doesn’t burn our house down.

It was heartbreaking hearing the stories of the families who lost their homes.  One father said that because of the strong winds it was like fire balls dropping on their house.  And when you look across the mountain of trees you see trees just blowing up here and there.

Note from Ardella Hawks: The pictures were taken from our front yard.   I really want to express my  appreciation to the Wheats. They never went to bed because they were helping all the evacuees.  They were amazing and such a blessing.

The photos were taken in the hour before the Hawks left their home on Sunday morning.