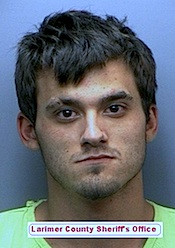 Deputies conducted a traffic stop of Mr. Smaxwill after observing defective tail lamps on his vehicle as well as observing him driving carelessly in the 4000-block of South Taft Hill Road. Subsequently it was determined that Mr. Smaxwill’s driver’s license was under restraint and he had no proof of insurance for the vehicle.

Further investigation revealed a number of items inside the vehicle that were believed to be stolen, including a computer monitor, a stolen credit card and a stolen vehicle registration as well as drug paraphernalia.  Upon arrest, a small amount of methamphetamine was found in Smaxwill’s shoe. It was later discovered that Smaxwill had allegedly used the stolen credit card on numerous occasions.

During the investigation Smaxwill reported that his home had been burglarized and several items stolen.  An investigation into this burglary later proved this report to be false.

The charges are merely an accusation and the defendant is presumed innocent until and unless proven guilty.